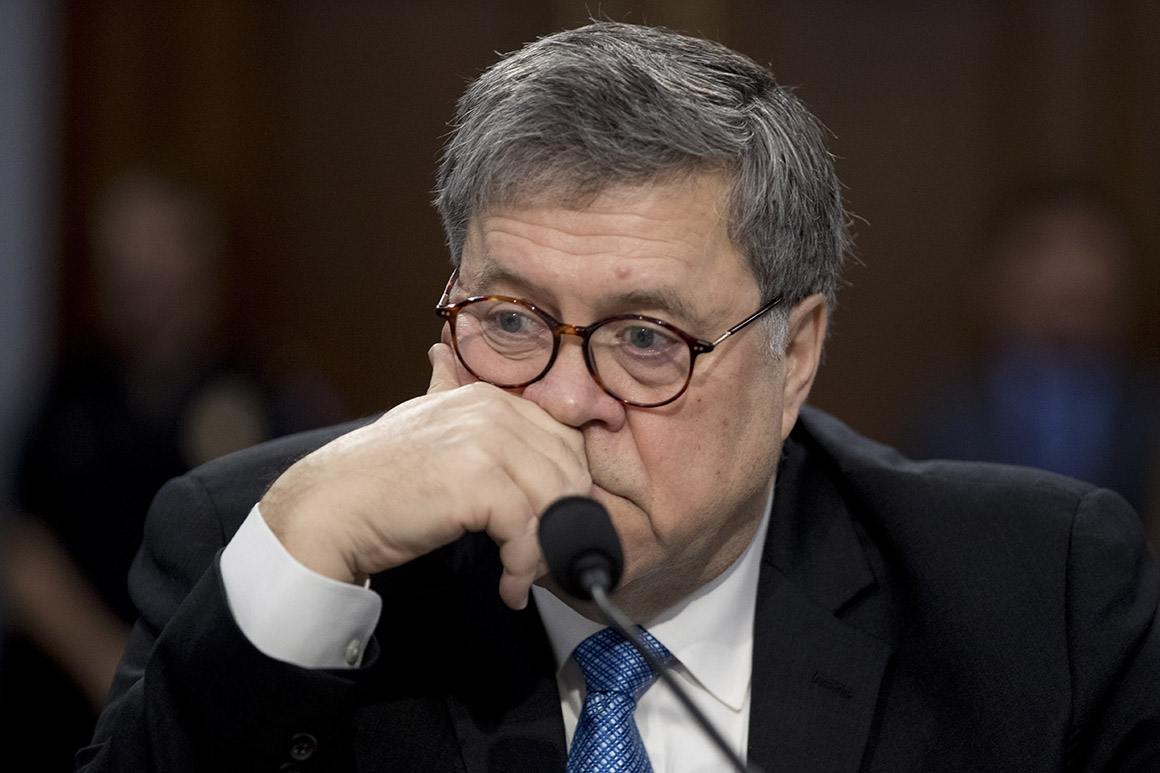 As Attorney General William Barr decides how much of Robert Mueller’s report to release publicly, recent reports about discontent within the special counsel’s team send a clear message to Barr: redactions are subject to debate.

Legal analysts and lawmakers overseeing the Russia probe — including House members who grilled Barr on Tuesday — say that even if Barr blacks out key portions of Mueller’s report before releasing it, citing factors like grand jury secrecy, classification and confidentiality, Mueller’s associates might second-guess him via the media or Congress.

Barr “might not have quite as much discretion without some consequences here,” said Andrew Wright, a former associate White House counsel to President Barack Obama. Wright said the message is that Barr “only has so much time and so much wiggle room" to delay and redact Mueller’s report before its public release without risking "further disclosures from that team.”

The reports about sentiments within the special counsel’s team started last week in the New York Times and led to follow-up coverage in several other media outlets describing frustrations inside Mueller’s team over how Barr portrayed their work and failed to release detailed executive summary materials they’d prepared.

Four sources familiar with the views from some members of the special counsel’s team confirmed to POLITICO the concerns about how their work has been interpreted absent the release of the entire Mueller report, even as Trump quickly hailed it on Twitter as a “total EXONERATION” — even though it said no such thing.

“Yeah, there was frustration with the summary and that there’s a hope that people have access to the actual underlying report,” said a source familiar with conversations about the Barr letter. “I think it’s fair to say there was generalized frustration.”

During a Tuesday House Appropriations Subcommittee appearance to discuss his department’s annual budget request, Barr was peppered with questions about the reported annoyance among some Mueller team members.

“I suspect that they probably wanted more put out, but in my view I was not interested in putting out summaries or trying to summarize. Because I think any summary, regardless of who prepares it, not only runs the risk of, you know, being under-inclusive or over-inclusive, but also would trigger a lot of discussion and analysis that really should await everything coming out at once,” Barr told Florida Democratic Rep. Charlie Crist.

In another exchange with Rep. Sam Graves (R-Mo.), Barr said he had not heard directly from anyone on the Mueller team upset about his work. The attorney general acknowledged many of the Mueller investigators had security clearances, but downplayed concern that the media stories amounted to legal violations.

“I haven’t seen any classified information leaked from, that I would attribute to, the special counsel’s office,” Barr said.

Inside Trump’s camp, the first reports attributed to associates of Mueller’s investigators have prompted alarm. Trump tweeted on Sunday that “Bob Mueller’s team of 13 Trump Haters & Angry Democrats are illegally leaking information to the press,” and his personal lawyer, Rudy Giuliani, called the “Mueller anonymous leakers … cowards and liars” for “leaking what they couldn’t prove.”

But it remains unclear whether Barr – who pledged to lawmakers Tuesday that the Mueller report would be public “within a week” — should brace for more grousing from the special counsel’s team.

While both Democrats and Republicans say they want to hear public testimony from Mueller himself, the special counsel’s former staffers are expected to shun the direct spotlight as they shift to other jobs in government, academia and private law firms.

Several sources close to Mueller’s investigators told POLITICO they doubt anyone on the special counsel team would be speaking up publicly anytime soon in media interviews or through authoring books.

“I’d be shocked if anyone would go on the record,” said one of the sources familiar with the Mueller team’s frustrations.

Randall Samborn, a former federal prosecutor and spokesman on the George W. Bush-era independent counsel probe into who leaked the identity of CIA operative Valerie Plame, said last week’s media reports of discontent within Mueller’s team appeared to him “more like a brush-back pitch than a full-fledged leak of any real investigative information.”

“It may seem like splitting hairs, but disclosure that the Mueller report is more damaging than the attorney general summarized, is more about tone than revealing specific information that was presented to the grand jury,” he said.

“It’s always been a rule that if partisan prosecutors start pulling political punches, that career agents and attorneys might use the media to preserve the integrity of investigations,” Samborn said. “But that can be neither an excuse nor justification for leaking grand jury or classified information.”

Samborn added he hopes that Mueller’s associates would find “legitimate ways” of conveying vital information to Congress if they should feel that Barr has withheld it without good cause.

“Only if that fails, might we then find ourselves reliving the Pentagon Papers and debating for decades whether leaking secret information served the national interest or no,” he added.

Legal experts said that despite Trump’s complaints about ‘illegal’ leaks, no one is likely to ever face any consequence for disclosures like those in recent press accounts.

“I would not be quaking in my boots,” said Kathleen Clark, a professor at Washington University School of Law in St. Louis.

Experts say there is no broad legal rule that every fact a prosecutor learns while on the job is subject to a vow of secrecy, although classified information and information obtained by a grand jury is legally protected.

Complaints about Barr’s handling of the report or highly general statements about its format don’t seem to tread into those areas, lawyers said.

“It’s hard to imagine that their subjective sense of dissatisfaction could somehow result in a finding of illegality,” Clark said. “And as for disclosing the structure of the report, it’s inconceivable to me that kind of disclosure could result in any kind of disciplinary action on an employment or legal-ethics front.”

However, lawyers do have some confidentiality obligations that other government officials don’t, like a duty to protect legal advice rendered to a client and other attorney-client communications.

The issue popped up briefly in March 2017, when lawmakers wanted to hear from Sally Yates, the Obama administration holdover who rose to become acting attorney general but was fired by Trump after she refused to defend his travel ban.

Yates’s lawyer David O’Neil said the Justice Department initially took the position that “all information Ms. Yates received or actions she took in her capacity as Deputy Attorney General and Acting Attorney General are client confidences that she may not disclose absent written consent of the Department.”

The Justice Department also said the White House might have its own confidentiality concerns, but both entities eventually gave her the green light to testify.

Lawyers said prosecutors or ex-prosecutors who disclosed information to Congress would likely have more protection, particularly in response to a subpoena, than those who spoke publicly or with reporters.

The identity of the sources cited in the first published reports about the Mueller team members’ concerns have not been made public. The Times’ story was built around information gleaned from “government officials and others familiar with their simmering frustrations” while the Washington Post attributed its article to “people familiar with the matter.”

If the frustrations were relayed via members of Congress or congressional staff, legal experts say Mueller’s aides may well be insulated from any legal consequence. However, leaks to the press—even disclosures alleging wrongdoing—can lead to adverse consequences for government lawyers.

Clark pointed to an ethics complaint against Justice Department lawyer Thomas Tamm for calling the New York Times with information about the Bush administration’s warrantless wiretapping program. Tamm admitted to the leak and was never prosecuted for it, but accepted a public censure from the D.C. Bar in 2016 for revealing client confidences.

It could be quixotic to prevent ex-prosecutors from all discussion of their former jobs. Mueller’s probe has spawned a cottage industry of former federal prosecutors – some are paid five- or even six-figure salaries – who publicly discuss matters they handled in their official positions.

Still, the notion that a prosecutor’s spilling of secrets from a special counsel investigation could trigger legal action is not theoretical.

In 1990, a young former prosecutor in Independent Counsel Lawrence Walsh’s Iran-Contra probe, Jeff Toobin, went to court to get a pre-emptive ruling that a book Toobin had authored about his time in Walsh’s office could be published without running afoul of various confidentiality agreements as well as duties to protect classified information and grand jury secrets.

A federal judge in Manhattan essentially gave Toobin the go-ahead to publish, saying that officials in Walsh’s office and elsewhere in the government were being unreasonable about their objection. However, the judge set aside the legal ethics question, saying that could be addressed by bar authorities.

While the ruling was on appeal, Toobin and Penguin Books published his book, “Opening Arguments.”

A federal appeals court criticized that move and wiped out the protection Toobin won in the earlier district court decision, although no discipline or other sanction was ever imposed on the young lawyer, who is now a prominent legal analyst for the New Yorker and CNN.