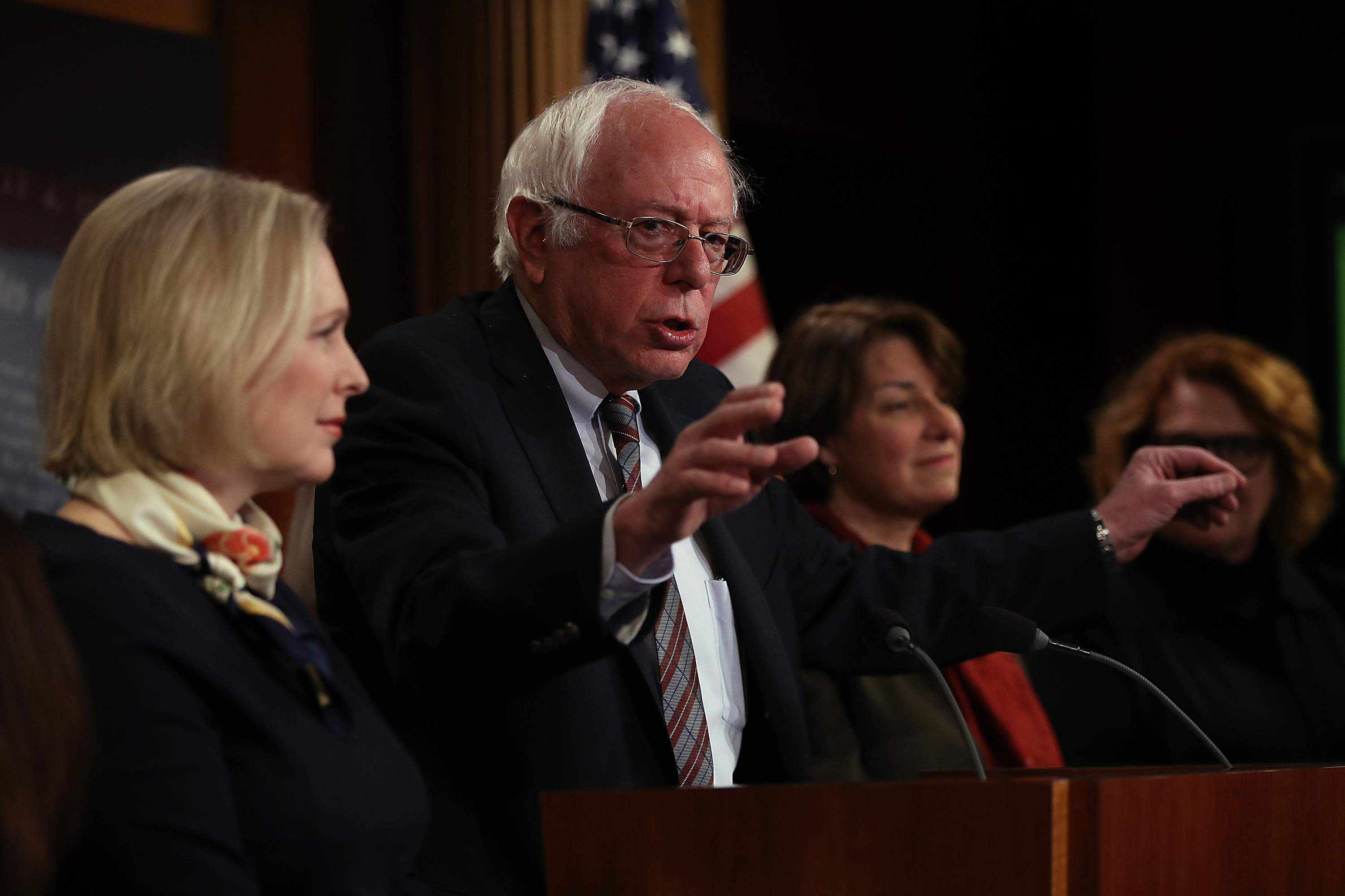 Democratic senators running for president are lining up behind a sweeping bill to combat an issue that’s haunted several of their own offices and campaigns: workplace harassment.

Sens. Amy Klobuchar, Kamala Harris, Cory Booker, Kirsten Gillibrand, Bernie Sanders and Elizabeth Warren have all signed on to the BE HEARD Act Democrats unveiled Tuesday. The legislation would strengthen discrimination protections for LGBT workers, ban the practice of mandatory forced arbitration and non-disclosure agreements that prevent employees from speaking out about harassment, eliminate the tipped minimum wage, and make it easier for workers of all kinds to report on-the-job harassment and win compensation from their employers.

While many of the candidates have sponsored narrower bills in the past to address sexual harassment and retaliation on college campuses, in the military, and within the halls of the Capitol itself, this bill is the first legislation in decades to tackle the problem across all industries. Drafted by Sen. Patty Murray (D-Wash.), its prospects in the GOP-controlled Senate are slim to none. But a House effort led by Rep. Katherine Clark (D-Mass.) has a decent shot at passage.

Now, in the lead up to the first presidential election of the #MeToo era, the candidates hoping for a chance to take on Trump are burnishing their pro-worker and anti-harassment bona fides as they try to turn the page on their own workplace scandals. While Booker and Warren have not had any problems on this front, the other Democratic candidates have in recent months dealt with damaging stories about harassment and retaliation occurring on their watch.

Sanders (I-Vt.), who leads the group of senator-candidates in polling and fundraising, faced a firestorm late last year over accusations that his 2016 presidential campaign was rife with instances of sexual harassment and assault. Former staffers alleged that a top aide from Sanders’ 2016 run forcibly kissed a younger subordinate, said that field staff retaliated against those who rejected their advances, and described a overall culture of sexism and permissiveness in Sanders’ first national campaign.

Sanders has publicly apologized to the women who worked on his campaign, saying their procedures for preventing harassment “were clearly inadequate” and vowing: “We will do better next time.”

Since then, his campaign has worked to make good on that promise, hiring a national leadership team that is about 70 percent women and recognizing the staffers’ labor union – a first for a major presidential campaign and an additional layer of accountability and protection for its workers.

Sanders did not respond to a request for comment on his endorsement of the anti-harassment bill.

For Gillibrand (D-N.Y.), sponsoring the BE HEARD Act is the latest action in her campaign to curb sexual harassment and assault.

“For six years, Senator Gillibrand has relentlessly pursued taking on sexual harassment in the workplace, whether it was the Pentagon, colleges and universities, inside the halls of Congress or legislation she introduced to end forced arbitration in workplaces around the nation,” campaign spokesman Glen Caplin said in a statement.

But even Gillibrand’s own Senate office has struggled with the issue.

In March, POLITICO reported that a young female staffer resigned in protest of the office’s handling of her sexual harassment complaint. The woman said a senior aide had made repeated unwanted advances in the workplace and retaliated against her when she refused them. In her resignation letter, the woman said she was disillusioned by how the office investigated her complaint and kept the man accused on staff (he was ultimately dismissed after another investigation months later).

Gillibrand said at the time that the episode was an example of how pervasive sexual harassment is and why stronger policies are needed to ensure transparency and justice for victims.

As in the case with Gillibrand’s aide, sexual harassers frequently target those with less status and power in a workplace.

The Senate bill aims to address this by extending protections beyond traditional full-time employees to independent contractors and interns who generally have little legal recourse. It would also create a fund with tens of millions of dollars to help low-income workers pay for legal assistance to press their harassment and discrimination claims.

Harris (D-Calif.) has also grappled with accusations against a former aide. The Sacramento Bee reported in December that a senior advisor in her Sacramento office was accused of harassing and demeaning his female coworkers when he worked at the California Justice Department during Harris’ tenure as the state’s Attorney General. The behavior included placing the office printer under his desk and ordering the woman to crawl on the floor to replace the paper and ink on a daily basis. The woman sued over the office’s handling of her complaint and under Harris’ successor Xavier Becerra won a $400,000 settlement.

Harris maintains that she was unaware of her aide’s history of harassment and the settlement. After the story surfaced, the aide offered his resignation and she accepted.

In March, however, an investigation by the Los Angeles Times found that this was just one of several harassment and retaliation complaints settled by the California DOJ under Harris’ leadership – with more than $1 million paid out to employees. Though Harris said she was unaware of the other cases as well, she added, “The buck stopped with me.”

“No office is immune to misconduct, and there is much more work to do to ensure all are protected,” she said.

Klobuchar (D-Minn.), another cosponsor of the BE HEARD Act running for the Democratic nomination, has faced accusations of creating a hostile work environment in her Senate office, with staffers describing a pattern of angry outbursts and humiliating comments from the senator. Klobuchar defended herself as a “tough boss” with high expectations but also apologized and vowed to “do better” by her employees. Her campaign and Senate office did not respond to POLITICO’s request for comment on her endorsement of the BE HEARD Act.

The new anti-harassment bill builds on proposals previously introduced by Gillibrand, Harris and Warren (D-Mass.) that would have banned companies from including sexual or other forms of harassment in any non-disclosure acts they make employees sign, and required public companies to turn over data about allegations of harassment in the workplace. The practice of using NDAs to silence victims of sexual harassment recently came under scrutiny during investigations into Harvey Weinstein, Fox News, and President Donald Trump.

As the ever-growing field of Democratic candidates jockey for a chance to take on Trump in 2020, they know they are under the microscope when it comes to sexual harassment. Their campaigns have implemented mandatory trainings, set up anonymous hotlines for staff to report misconduct, and rigorously screened new hires for any history of past accusations. The aim is to both practice in their own offices what they’re preaching on the campaign trail, and to create a clear contrast with Trump, who has been accused of sexual misconduct by more than a dozen women.