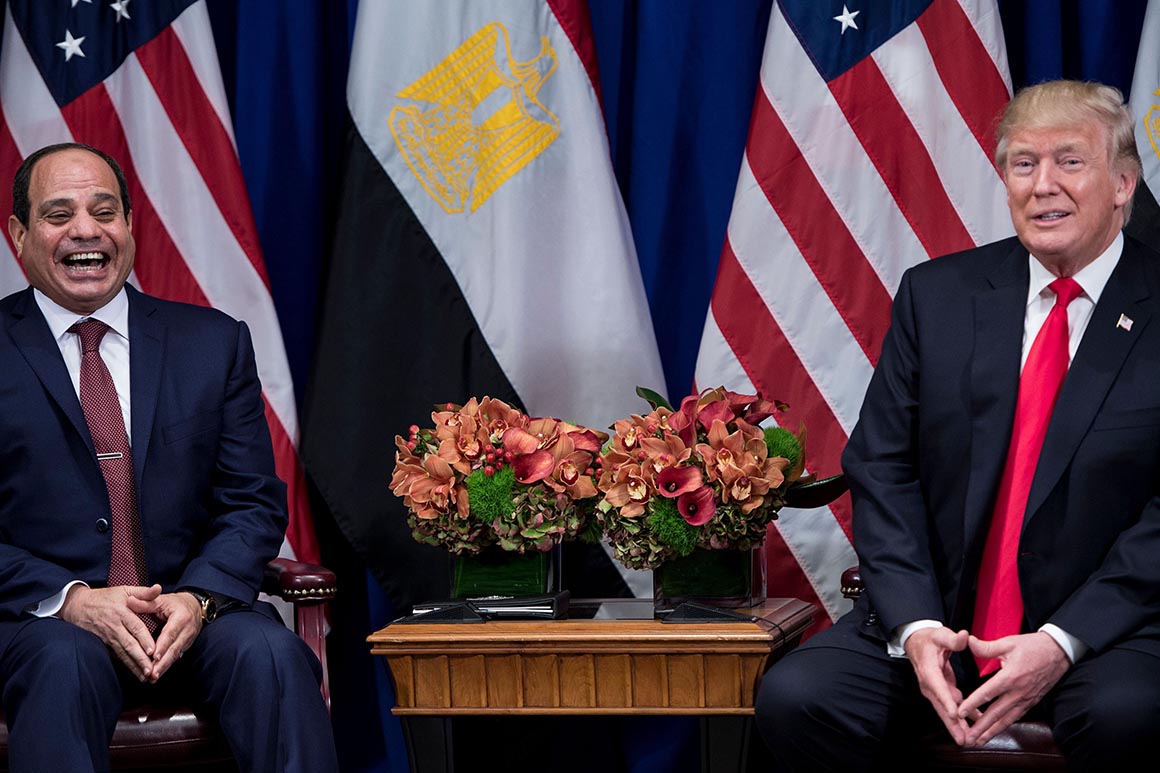 As someone who has watched the Egyptian people struggle against dictators for years, it is hard to fathom the fact that President Donald Trump will welcome Egypt’s brutal military leader, Abdel Fattah al-Sisi, for a White House visit this week.

Eight years after Egyptians went to the streets to remove 30-year ruler Hosni Mubarak and only weeks after Algerians did the same to remove 20-year autocrat Abdelaziz Bouteflika, the White House is betting on Sisi. It’s an endorsement Egypt’s president-for-life will use to entrench his grip on power: Showing he has Trump’s enthusiastic support will help Sisi force any potential critics in the army or elsewhere to follow suit.

Sisi’s Oval Office photo-op will come just a week or two before Egypt holds a popular referendum on amendments to the constitution that would give Sisi an exception to term limits, allowing him to stay in office until 2034. The amendments will also give the military a constitutional right to intervene in politics and will tighten his grip over the judiciary. If the referendum is similar to Sisi’s second election in 2018, Egyptian voters—demoralized and cowed by years of brutal repression since the 2013 military coup—will largely stay home.

To be clear, amending the constitution is not about the security or prosperity of Egypt. It is Sisi’s attempt to develop a highly personalized form of power for himself and loyal military officers, sidelining other institutions and ending all meaningful accountability—a direct violation of his own promises.

What good, then, can come of supporting Sisi to keep himself in power indefinitely? What harm might it cause? Can the United States remain neutral? As a former policymaker, I know firsthand that U.S. officials often face difficult decisions when trying to balance national security interests with human rights. But our history in the Middle East has shown that we often get these decisions catastrophically wrong.

Trump should support Sisi in his bid to stay in power indefinitely, the general’s supporters argue, because he is a visionary uniquely qualified to combat dangerous Islamists, reform Islam, boost women’s rights, fix his country’s ailing economy and promote regional peace with Israel. Plus, the U.S. needs to give Sisi unconditional backing lest Egypt fall into Russia’s grip.

Is Sisi a unique warrior against terrorism? While a concerted military push into the troubled Sinai in 2018 did quiet down the terrorist insurgency (an indigenous group that affiliated to ISIS) a bit, Sisi has no magic formula. Violence continues, including a significant attack against government forces in February. If anything, the continued presidency of a strongman who oversaw mass killings and other brutal human rights violations fuels recruits to violent movements.

Is Sisi an irreplaceable reformer of Islam and friend of Christians? Sisi is fond of positioning himself as such, but mostly he has resorted to public statements and gestures rather than significant changes to government policies, which continue to discriminate against non-Muslims. He has brutally crushed the Muslim Brotherhood as a political rival but failed to protect Christians from terrorist attacks. In fact, Sisi’s government has been more zealous than that of his predecessors in enforcing illiberal norms against atheists and LGBT citizens, among others.

Is Sisi the friend of women? In the style of Saudi Crown Prince Mohammed Bin Salman, yes–which is to say that Sisi gives lip service to women’s rights (winning praise from Ivanka Trump) while harshly repressing independent women’s rights organizations and activists. There have been no significant advances in women’s rights during his five years in power.

Is Sisi making an economic miracle? International Monetary Fund officials say they are content with Sisi’s austerity measures, but there is a big fly in the ointment: the growing economic dominance of the rapacious military. Foreign direct investment was lower in 2018 versus 2017 because investors do not want to compete on a tilted playing field. GDP growth is driven by energy production and government construction projects; in any case it is eaten up by rapid population growth. Youth unemployment remains very high, and double-digit inflation has led to more downward than upward social mobility under Sisi’s broken economic model.

Is Sisi a priceless partner to Israel and will he deliver on Trump’s peace deal? In the 40 years since the peace treaty, Egypt has cooperated with Israel consistently on military and intelligence matters—even during the brief tenure of deposed Brotherhood president Mohammad Morsi. Egypt under Sisi continues to impose a heavy price on civilians (even members of parliament) who meet with Israelis or visit Israel. Regarding the Trump peace plan, count on Sisi to do only what is in Egypt’s national security interests and not one iota more.

Finally, should Sisi be supported unconditionally as a bulwark against the encroaching grip of Russia? Sisi’s personal affinity with Russian President Vladimir Putin and his desire to grow that relationship have been on display since he came to office. He has purchased more Russian weapons than his predecessors did, including a recent $2 billion deal for fighter jets that might trigger U.S. sanctions. If the concern is pushing back against Russian influence, Sisi is more of a problem than an asset.

So those are the supposed benefits of supporting Sisi. What about the potential dangers?

First, helping Sisi stay in power violates longstanding U.S. opposition to such moves—which tend to increase corruption, diminish accountability and lead to change via violence instead of politics—around the world. Even the Trump administration, not known as democracy enthusiasts, has criticized similar amendments in Democratic Republic of Congo, Burundi, Rwanda and Bolivia. Making an exception for Sisi—currently head of the African Union—sets an injurious example.

Second, supporting Sisi in this brazen power grab will diminish rather than increase U.S. leverage over him. Experience shows that the U.S. wins concessions from Egypt—for example, overturning verdicts against workers in American NGOs, making military aid more productive, promising to repeal a draconian NGO law—only after applying strong and persistent pressure. There is no reason to give Sisi this undeserved benefit in the face of serious outstanding issues involving U.S. citizens, particularly those detained as political prisoners as well as April Corley (an American gravely wounded in a bizarre 2015 attack by the Egyptian military).

Third, inordinate support for Sisi will only undermine U.S. influence in the country—a lesson American officials should have learned by now. In 2011 and 2013, the Obama administration was harshly criticized for being seen as too close to Mubarak and later to Morsi, damaging America’s standing among Egyptians. Why would the Trump administration similarly undercut U.S. leverage by overinvesting in Sisi?

Can the United States stay neutral?

This much we know about dictators: They usually end up overstaying their welcome and brutalizing their own citizens. So supporting Sisi’s bid to stay in power for decades will certainly come back to haunt the U.S. Nor can the U.S. really prevent him from forcing through these constitutional amendments.

Yet claiming neutrality is not a credible option while the United States continues to back Egypt’s military to the tune of $1.3 billion annually.

The only sensible course is for the United States to make clear, privately and publicly, that it opposes the amendments and sees them as taking Egypt in the wrong direction—even if the U.S. cannot stop them from happening. Whether the Trump administration does do so or not, members of Congress should, via statements and conditions on military assistance.

What the United States says and does still matters a great deal in Egypt—otherwise, why would Sisi even be coming to Washington now? At a bare minimum, members of Congress should signal their understanding of the plight of citizens of Egypt, where, as actor and activist Khaled Abol Naga said at a recent briefing, Sisi’s narrative is, “nobody cares about you anymore.”

It’s time, at a minimum, to show he’s wrong.