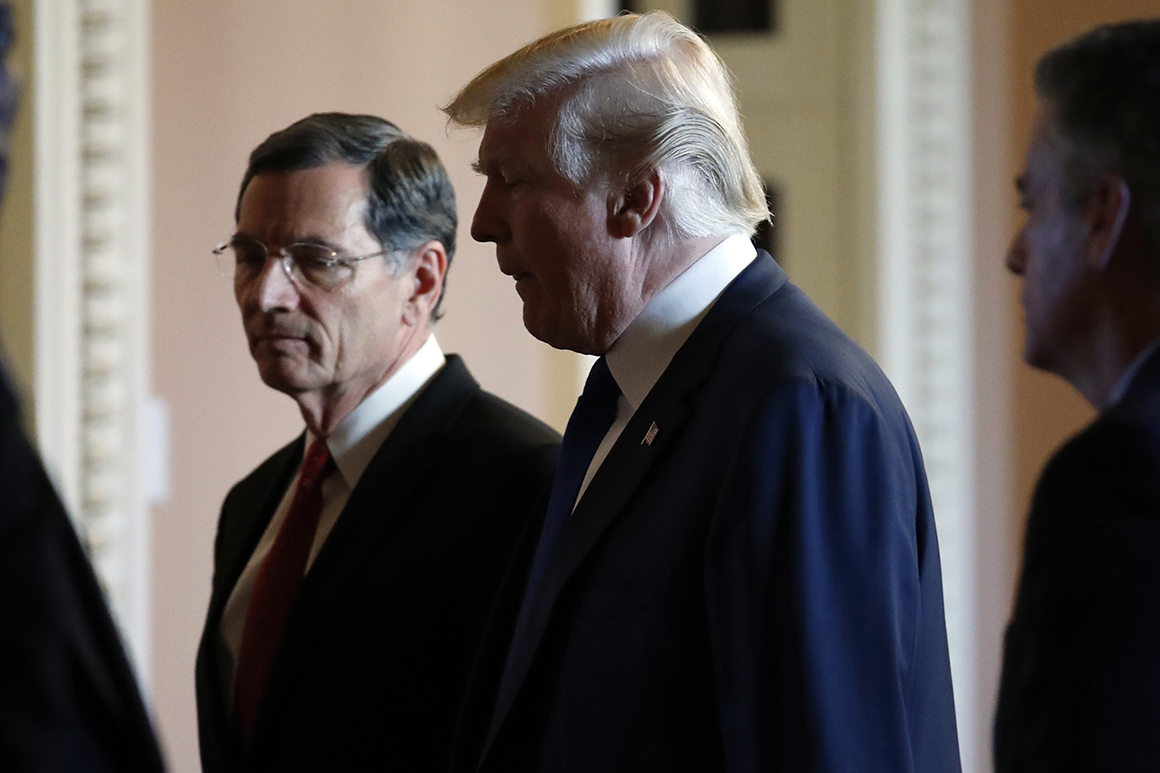 President Donald Trump promised a new plan to replace Obamacare. But the four Senate Republicans he tapped for the job aren’t jumping at the opportunity.

Sen. Rick Scott (R-Fla.) says any new plan has to come from the White House — and that he had no warning Trump planned to make him part of the health policy group. Mitt Romney (R-Utah) won’t say more than he and colleagues are “working on health care thoughts.” John Barrasso (R-Wyo.), when asked about the Republican plan, turned the question back on the opposition, saying, “Democrats want to go to the complete government takeover of health care.”

And Sen. Bill Cassidy (R-La.), the fourth member of Trump’s team, hasn’t committed to anything more than “conversations with colleagues” about health care affordability.

It’s clear that a week into the Trump-mandated makeover as the “Party of Health Care,” few lawmakers want ownership of an issue proven toxic to Republicans’ political futures. The GOP has been deadlocked on a replacement since its high-profile repeal effort collapsed in the fall of 2017. That’s left the party paralyzed — reluctant to contradict Trump but scared of entering another campaign cycle without a coherent health care message. Those most qualified to craft a plan have no interest in the job, while others eager for another repeal effort aren’t gaining traction.

Barrasso, the No. 3 Senate Republican, has spoken regularly with the White House over the last week. But there’s no indication those discussions produced anything beyond the realization it’s easier to shift the focus to Democrats.

Barrasso said a GOP plan would include ensuring people can “buy insurance that works for them and their families and is affordable.”

Such platitudes — set against Trump’s confident vows that the GOP would indeed replace Obamacare with a “really great“ plan in 2020 — have only accentuated the yawning gap between the White House and Hill Republicans on an issue that seems primed to burn the party again.

“This is going to be part of the campaign, part of the debate,” said Sen. John Cornyn of Texas, a top Senate Republican up for reelection next year. “Whether anybody likes it or not.”

Across the Capitol, there’s slightly more enthusiasm but even less consensus on where to start.

“There’s an appetite to get some working groups together to start coming up with some policy positions,” said Rep. Tom Reed (R-N.Y.), who characterized the GOP as in the “digest, listen and compile ideas” phase.

House Freedom Caucus Chairman Mark Meadows (R-N.C.) said he and other conservative lawmakers are workshopping their own ideas, but he noted they “will be more conceptual than actual legislative text.”

Republicans are not completely devoid of ideas. But they‘ve yet to bridge the divisions between centrists and conservatives that tanked their last repeal effort. The White House in its fiscal 2020 budget request revived an outline of the GOP’s failed Graham-Cassidy plan, which sought to repeal Obamacare in favor of giving states federal grants to establish their own insurance markets.

That legislation — which drew protests over projections it would strip millions of people of coverage — failed to win enough support even among Republicans. Cassidy, who helped author the plan, has since declared the proposal “dead,” with his office later saying that Republicans need to develop something new.

Rep. Kevin Brady (R-Texas), the top Republican on the House Ways and Means Committee, called Wednesday for a “fresh start on health care.” Yet he also had little to offer beyond calls to revive old legislation, listing a combination of Obamacare repeal bills that flamed out in 2017 and Trump administration rules deregulating the insurance market that courts have blocked.

There is one new and concrete proposal being pitched by a Hill Republican: Arkansas Rep. Bruce Westerman’s legislation relaxing Obamacare regulations and codifying major Trump policies, putting a conservative spin on existing law. But the bill, which was released in February, has no co-sponsors.

Outside conservative groups aren’t doing much better, despite spending more than a year trying to build support for their ideas in Congress and the White House. The “Health Care Choices” proposal developed by the right’s prominent think tanks would give states block grants to cover residents — a concept the authors argue can start the process of following through on Trump’s pledge to tackle the issue after 2020.

“There’s a perception issue that what was done in 2017 lacked a clear direction other than fulfilling a campaign promise,” said Marie Fishpaw, the director of domestic policy studies at The Heritage Foundation. “So President Trump is right to challenge his party to come up with a plan, because you can’t just hold another election where you say, ‘Put us in charge.’ You have to do the work now, and we’re doing the work.”

The group still faces an all-too-familiar problem: Conservatives argue the plan doesn’t go far enough to repeal Obamacare, and more moderate Republicans are concerned it would violate their pledges to protect people with pre-existing conditions.

Some conservative Republicans, meanwhile, balk at its failure to unwind more of the law.

“It would take a lot of convincing to get us on board,” said Jason Pye, vice president of legislative affairs for FreedomWorks, adding that any GOP proposal needs to eliminate Obamacare’s core patient regulations and place a stricter cap on Medicaid funding. “This is not a repeal plan, and any suggestion otherwise is willfully false.”

The White House last year told Republican groups that it wouldn’t support the Health Care Choices plan without buy-in from the entire conservative community. And few lawmakers interviewed this week said they have even heard of the proposal.

“You would think any conservative plan would eventually make it to the Freedom Caucus, so maybe that’s news right there,” Meadows said.

Trump’s close allies in Congress like Meadows insist that the party needs to make health care a top priority, because Democrats are bound to use Obamacare like a cudgel after it fueled their midterm victories. Senate Republicans face a much tougher electoral map in 2020, and Democrats have made it clear that they will continue hammering the GOP for trying to eliminate popular patient protections in Congress and in the courts.

“If you look at eight years of the Republican majority, they never came up with an alternative,” said House Budget Chairman John Yarmuth (D-Ky.). “We’re going to keep highlighting the fact that they don’t have a solution and never have.”

The one opening Republicans felt confident they could exploit — attacking Democrats’ "Medicare for All" proposals as a reckless threat to private insurance — was undercut by Trump’s renewed offensive against Obamacare.

“The president’s got a bully pulpit, he’s an unconventional leader. We don’t always know what he’s going to say,” said Rep. John Shimkus (R-Ill.). “So, surprise! He hands us the ball and we gotta run with it now.”

That’s left some vulnerable Republicans looking for answers within.

"Republicans have to make it very clear to the American people, on health care, that we’ll have a solution to the problem,” said Sen. Thom Tillis (R-N.C.), who’s up for reelection in a key swing state. “If you look at the proposals we were cycling through when we were on the brink of repealing Obamacare, it’ll be probably those, and some new ideas.”