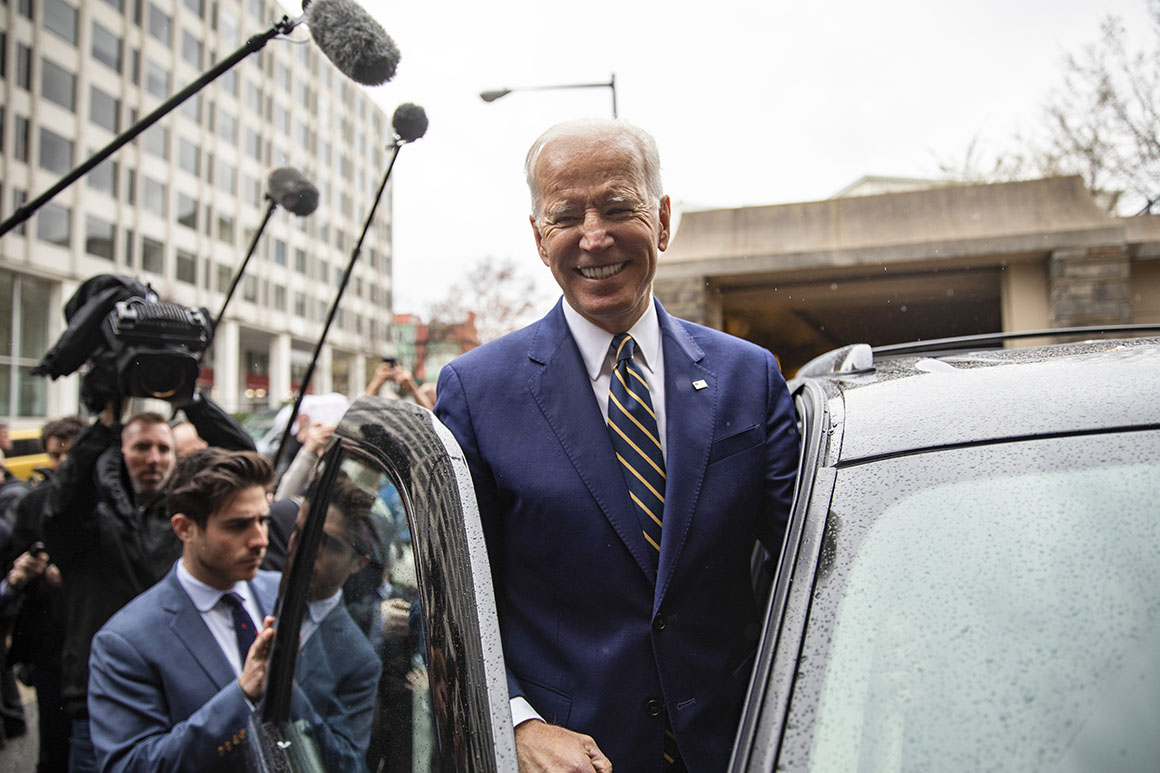 Sam Lieberman, former chairman of the Nevada Democratic Party, has a framed picture in his office of Joe Biden. In the photo, taken sometime during Biden’s short-lived 2008 presidential campaign, the former vice president is standing behind Lieberman and kissing his scalp.

It’s the kind of physical touching — or violation of personal boundaries — that has gotten him in trouble with a variety of women and clouded his prospective entry into the presidential race. Yet it’s also a reminder of Biden’s long history of toiling in the early presidential state vineyards, and his easy familiarity with party activists and officials — many of whom are willing to give him the benefit of the doubt.

Interviews with more than a dozen operatives, party leaders and county chairs in the four early presidential states found similar sentiments. Among these gatekeepers — many of whom have met Biden during his previous runs for president or in his capacity as Barack Obama’s running mate — the prevailing view is that the current controversy isn’t enough to seriously damage his candidacy in the event he chooses to run.

“The people in the early states have known Joe Biden for a long time, have seen him time and again, and we feel a great affection for him,” said Carol Fowler, a prominent South Carolina Democrat who along with her husband, Don, led the state party and hosted countless fundraisers over the years.

Fowler dug through her phone and found a couple of pictures of her and Biden.

“And there [Biden] was giving me a big squeeze around the shoulders,” she said, referring to one of the photos.

Fowler thought back to how she felt at the time, and said, “I was being flattered that the vice president knew who I was, came up and gave me a big squeeze.”

The generational divide that surfaces in reactions to Biden’s behavior isn’t adequately captured in discussions with state and local party officials, who tend to be older and more closely tied to the establishment. Still, their overwhelming consensus view is that Biden’s behavior won’t have a material effect on his early state reception. One reason is that few view it as crossing the line into explicit sexual harassment. Another is that none thought the allegations rose to the level of those made against President Donald Trump.

“He has been acting the exact same way, as far as I know, for 30 years. It’s not anything that’s new or surprising for people who’ve been around him,” said longtime Iowa Democratic strategist Jeff Link. “There’s a 20-person primary that’s forming. There are people who are gung-ho for other candidates and I think they’re going to keep trying to make this an issue and stir the pot going forward. I don’t think that’s going to take hold.”

For more than a week, Biden has been dealing with the blowback that began when Lucy Flores, a former Nevada state legislator, wrote that the former vice president had invaded her personal space during a political event, smelling her hair and kissing the back of her head. Since then, several other women have shared stories of their own unwanted interactions.

The allegations weren’t unexpected: Biden began laying the outline of his defense before Flores went public, referring to himself in March as a “tactile politician” prone to doling out hugs.

After initially responding to the controversy with a series of written statements, Biden on Wednesday pledged in a video to “be more mindful and respectful of people’s personal space” — though he stopped short of apologizing the past interactions. The two-minute, direct-to-camera video posted to Twitter currently has more than 6 million views.

Biden’s video response drew mixed reviews. While some gave him credit for taking responsibility, Flores and others questioned his sincerity since he failed to apologize for his behavior. He then joked about his affectionate, touchy style two days later during a speech to the International Brotherhood of Electrical Workers.

Working to Biden’s advantage in the early states is the fact that many voters have seen him up close or even hosted him in their homes during his dozens of visits to their states over the years. During the 2018 midterm cycle, a decade after his last presidential bid, Biden visited 24 states including stumping for candidates in Nevada, South Carolina and Iowa.

Linda Nelson, former chair of the Pottawatomie County Democrats in Iowa, said she has fond thoughts of Biden, pointing to what she described as his compassionate gesture after the son-in-law of close family friends passed away.

“Joe has reached out to them, especially the bride who lost her husband. I just think it’s his way, ever since he was a young senator and had a horrific loss of daughter and wife, so anytime somebody tells him his personal stories he reaches out,” Nelson said.

She said Biden continued to check in from time to time with different members of the family to offer comfort. “He doesn’t just run into a crowd and hug everyone, I think it’s just people who tell him their stories.”

Jim Mowrer, who ran veterans outreach in Iowa during Biden’s 2008 presidential run, said Biden’s personal relationships will go a long way toward insulating him from criticism in Iowa.

“When I attempted to ask ‘what do you think about this’ without influencing them in any way, shape or form, almost universally people say it’s overblown,” Mowrer said of his conversations with other Iowa Democrats. “A lot of people who’ve been involved for awhile have met Joe Biden at one time or another, including in ‘08 when he was running. I think that makes a lot of difference because people understand who he is when they’ve met him in person.”

None of that is to say Biden gets a free pass — few of those interviewed for this story are willing to entirely dismiss the impact of the recent accounts. Nelson said she was troubled that Biden joked about the ordeal on Friday during his address to union workers.

“I found that distasteful,” said Judy Reardon, a longtime Democratic operative in New Hampshire, who described Biden’s behavior as not disqualifying, but also “not nothing.”

“If he wants to take the tack that it’s a big joke, I wouldn’t recommend that,” she said. “But that is one way to do it. But you can’t do both: one day a serious interview, then the next day making jokes about it. Then it seems like you’re insincere.”

Other early state activists cautioned that Biden’s future behavior will be under a microscope. If he moves forward with a campaign, the pressure will be on for the 76-year-old to adapt to new social norms and to diversify his staff to add more women and people of color. His team’s lagging responses and the former vice president’s subsequent apology-less video, they said, raised questions as to whether Biden and his staff were too slow to recognize the changing political environment in the #MeToo era.

The other early state danger, some said, is that he’s waiting too long to get into the race. A slew of Democrats in the historically diverse 2020 field have already barnstormed the early states, generating excitement and momentum while developing some early allegiances and even scooping up top flight staffers. Biden, by contrast, has been dealing with news cycle after brutal news cycle reminding that he’s stylistically from another era.

Kathleen Sullivan, a former New Hampshire Democratic Party chair, said while Biden might be able to wait longer than most because of his name ID, she’s also seen signs of an enthusiasm shift away from others who stood on the sidelines a little too long, among them former Texas Rep. Beto O’Rourke. O’Rourke, in her mind, would have better captured momentum with an earlier visit to the first-in-the-nation primary state.

“His first trip, it was good. But if he had come earlier it would have been a bigger thing. There was a point where there was a lot of buzz, but then he was busy doing his road trip. By the time he got here, I think that gave an opening to Mayor Buttigieg. I think [Buttigieg] pulled some people away,” Sullivan said. “While I think Joe Biden is a little different, I do think it would be good for him to get here by say April, early May … We’ve got maybe 20 people running and there’s only so many voters to go around. There’s some really good candidates, you walk away and say: ‘wow. That was really good.’ You do start to develop favorites, you do start ordering them in your mind.”