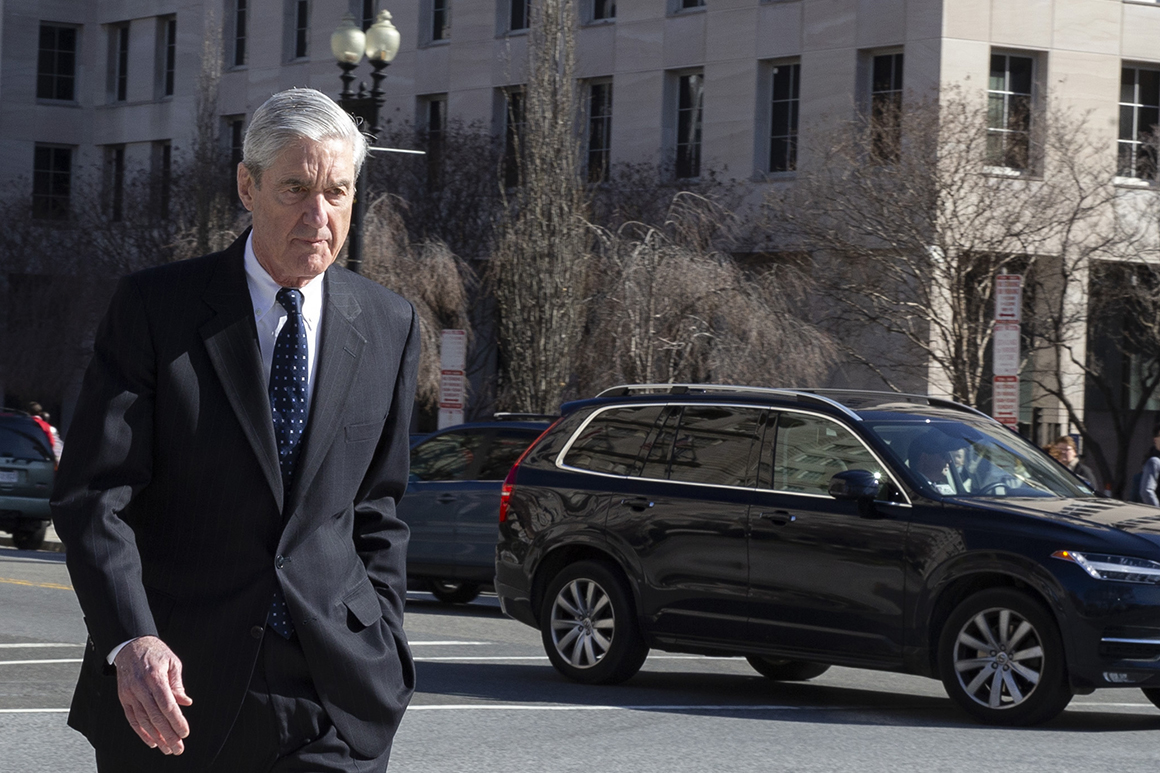 Attorney General William Barr is likely days away from issuing a redacted version of special counsel Robert Mueller’s findings, but Washington may be a ghost town when he does.

The House leaves for the week on Wednesday morning while Democrats hold their annual retreat in Leesburg, Va. Then members will scatter to their districts for a two-week recess, leaving Democrats urgently clamoring for a glimpse of Mueller’s report with a choice: to react from the road or underscore their concern by reconvening early at the Capitol.

It’s unclear if top House Democrats have planned a response once the initial version of Mueller’s report is shared with Congress. But lawmakers on the Judiciary Committee, which is leading the House Democrats’ Mueller response, say they’re at least open to the idea of coming back to Washington.

Yet it doesn’t appear Democrats have settled on a strategy. Though they’ve described the urgency of the situation as striking at the core of American democracy, they have yet to say whether there’s a concerted plan to respond when Mueller’s findings are delivered — let alone whether members should return to Washington when it happens. Partly, it’s because they’re uncertain how much of the report Barr will let them, and the public, see. And it’s unclear if he’ll offer closed-door briefings for lawmakers to reveal what’s under the numerous redactions he intends to make.

“If it’s necessary for us to be in Washington to review what’s in the report, then certainly members of the judiciary committee should be given the opportunity to come back and I think it’s important that we take it up,” said Rep. Ted Deutch (D-Fla.), one of 24 Democrats on the panel.

Though lawmakers are loath to interfere with pre-planned recesses, Democrats have been urgently clamoring for a glimpse of Mueller’s findings since he finalized his report on Russian contacts with the Trump campaign in 2016 — and whether President Donald Trump obstructed the investigation. Mueller completed his report three weeks ago but Barr has kept a tight seal on it, releasing only a four-page assessment that Democrats say may have skewed the underlying report in Trump’s favor.

Barr has indicated he is currently redacting the report for sensitive information — like grand jury testimony and classified material — before delivering a version to Congress in the middle of the month. But Judiciary Committee Democrats say anything less than sharing the full report with Congress is unacceptable, and last week they authorized Chairman Jerry Nadler to subpoena Barr for the entirety of Mueller’s findings.

Nadler has yet to issue the subpoena but can do so unilaterally at any time. Republicans on the panel, led by Rep. Doug Collins (R-Ga.) ramped up the pressure on Democrats to return from recess too. In a letter to Democrats Monday morning, Collins said the panel should call Mueller himself to testify the week of April 22.

"Although the House is expected to be in recess that week, I think we can agree this business is too important to wait, and Members of the Committee will surely return to Washington at such a critical moment in our country’s history," Collins wrote.

If Barr does share any confidential findings with Congress — such as classified material, evidence relevant to ongoing investigations or material that could be damaging to “peripheral third parties,” who Barr has signaled he wants to protect from public embarrassment – it’s likely to be done in a secure setting in the Capitol or at the Justice Department, which would require lawmakers to be in Washington.

For this reason, Rep. Steve Cohen (D-Tenn.), another Judiciary Committee member, said he thinks his colleagues should return to address the report if it arrives during the recess. But others were more circumspect, deferring to House leaders’ judgment and suggesting they can react to Mueller’s report from home if necessary.

“I guess it depends on what’s in it. We waited this long. I can’t imagine that – it’s hard to know whether it would require an immediate reconvening of the committee,” said Rep. David Cicilline (D-R.I.).

An aide to Speaker Nancy Pelosi did not immediately respond to a request for comment.

Andrew Desiderio contributed to this report.