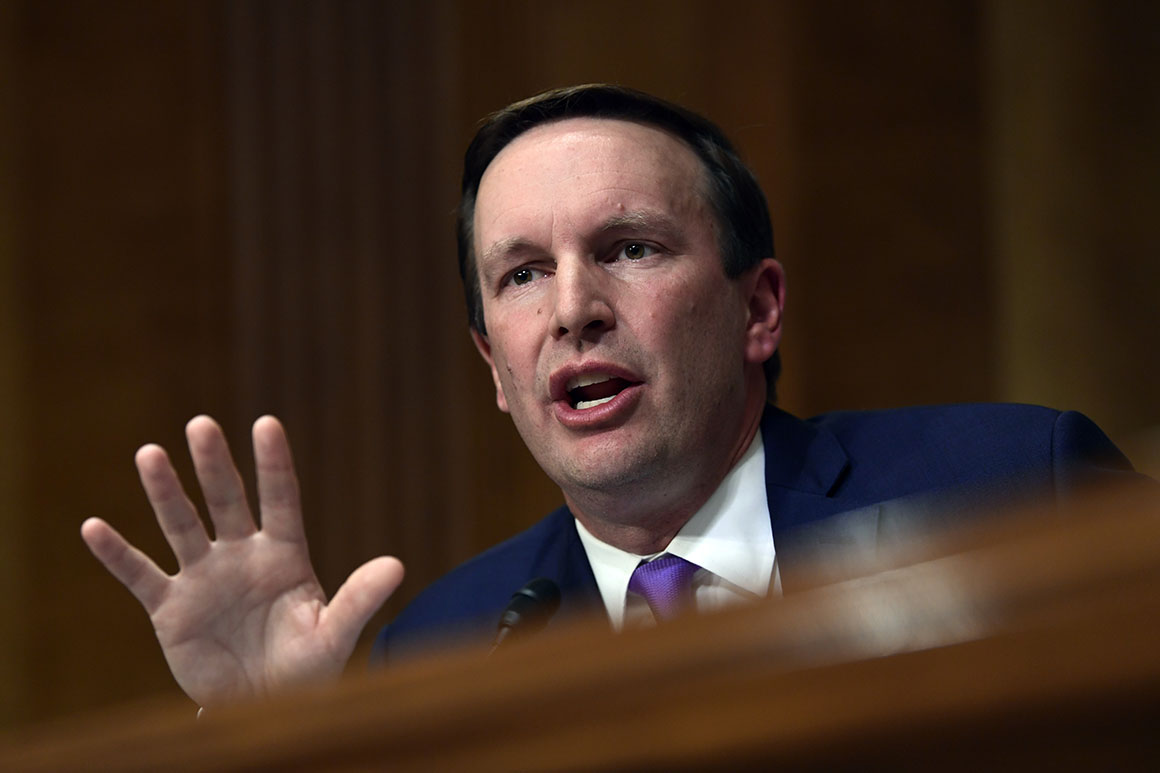 Democrats need to get serious about foreign policy in 2020 or risk losing to Donald Trump.

That’s the blunt warning from Chris Murphy, a second-term senator with increasing sway on the Foreign Relations Committee who just maneuvered a bipartisan condemnation of Trump’s foreign policy through Congress.

And Murphy, who’s making his case to several White House hopefuls, is increasingly worried his party is too focused on domestic policy and needs to train its fire on Trump’s haphazard national security record.

“This is not likely to be a foreign policy election. But it will be a close election in which a big national security gap between Democrats and Republicans could cost us the election,” the Connecticut Democrat said in an interview.

Democrats may ridicule the notion of Trump as statesman, but he‘s already bragging about winding down the country’s “endless wars,” improving relations with North Korea and eradicating the terrorists of the Islamic State.

“The quickest way to pierce [Trump’s] image of toughness is to show what a laughingstock America has become across the world,” Murphy added. “Talking about national security and foreign policy is a perfect mechanism to go strike at the heart of Trump’s brand, on a topic that he can’t handle.”

The president was indeed laughed at when he spoke to the United Nations. And he’s frequently spooked allies and his own generals — be it with his surprise Syria pullout and threats to blow up NATO to his repeated attacks on the European Union and withdrawal from the Iran nuclear deal and Paris climate agreement.

Trump’s erratic policy shifts appear to be taking a toll with the public. While Republicans still maintain an edge over Democrats when it comes to national security and foreign policy, recent polls show that the gap is narrowing to some of its smallest margins in the Trump era.

And so Murphy sees an opportunity for the party — and is pushing his half-dozen colleagues pursuing the White House to make America’s standing in the world more of a campaign issue.

He teamed up with Sen. Bernie Sanders (I-Vt.) to pass legislation ending the U.S. presence in Yemen’s civil war, in a startling bipartisan rebuke of Trump’s foreign policy.

He’s talked extensively with Sen. Kamala Harris (D-Calif.) about Syria, Saudi Arabia and Yemen, summing up his time with the Intelligence Committee member: “More time talking to Kamala than anybody else.”

Some Democratic contenders are beginning to embrace Murphy’s message.

“He has done things that have made the country less safe, that have weakened our alliances, that have been violating the Constitution,” Booker said of Trump in an interview. “This is something that should be a robust part of the conversation in 2020. I think you will hear me talking a lot.”

“He’s certainly vulnerable. Foreign policy by tweet has not made the United States either safer or more prosperous in the world,” said Sen. Elizabeth Warren (D-Mass.), who gave a foreign policy address last November and has sought to distinguish herself by introducing legislation barring the U.S. from using nuclear weapons first. “I hope he’s called to account for that in 2020.”

Still, 2020 candidates also acknowledge that foreign policy is unlikely to dominate the campaign in the primary.

“Is it what you get asked right away when farmer prices are so high? No,” said Sen. Amy Klobuchar (D-Minn.). “But I have tried my best to bring it up when I can and I will be doing much more on it.”

One reason Democrats may not be talking foreign policy as frequently is that they are more unified as a party on the issues than Republicans.

During the 2016 GOP primary campaign, Sen. Marco Rubio (R-Fla.) emphasized his hawkish profile while Sen. Rand Paul (R-Ky.) advanced a non-interventionist stance that was essentially absent from the GOP a decade ago.

Trump himself vowed to “bomb the shit out of” ISIS even as he distanced himself from George W. Bush’s foreign adventures and attacked the Iraq War.

Trump has largely followed through on his foreign policy campaign promises — at times pleasing libertarian-leaning lawmakers like Paul and infuriating hawks like Sen. Lindsey Graham (R-S.C.).

But since Trump has taken over the GOP, both wings of the party say the president is heading into the election in a strong position on the world stage.

Rubio cited Trump’s success in beating back ISIS and his hard-line moves reversing Barack Obama’s Cuba and Iran policies, and argued that Trump has been “tougher” than past presidents on China. “He’s got a very good story to tell,” Rubio said.

The Trump campaign said Murphy’s efforts would be fruitless, citing the president’s record on foreign policy.

“He defeated the ISIS caliphate, brought North Korea to negotiating table, placed some of the toughest sanctions on rogue nations, and has NATO on the right path,” said Erin Perrine, a spokeswoman for Trump’s re-election campaign. “Democrats can continue to try and spread their pathetic delusions but the American people see right through it.”

Still, Trump has taken heat in recent weeks from both parties, in large part due to Murphy.

Bipartisan majorities in both chambers voted to cut off U.S. support for the Saudi-led coalition in Yemen’s civil war, a quest Murphy began years ago with little support from his own caucus, but which gained steam after Trump’s subdued response to the killing of journalist Jamal Khashoggi.

Trump will have to issue the second veto of his presidency to block the measure.

Murphy declined to join the six Senate Democrats vying for the White House; instead, he’s aiming to carve out a progressive foreign policy mantle for himself that he hopes can be a model for the party in future elections. He spent the last congressional recess in the United Kingdom during the failed Brexit negotiations, where he said foreign leaders are largely ignoring the president.

One of the youngest members of the Senate, the 45-year old Murphy could eventually chair the Foreign Relations panel if he stays in the Senate for the long haul.

And while he’s most interested in squeezing Republicans, he’s not averse to putting his own colleagues on the spot.

In 2018, as he forced votes on Yemen using obscure congressional rules, he said some of his vulnerable colleagues complained aloud about voting “on a civil war on the other side of the planet that nobody wanted to focus on.” To this day, Murphy said, it’s exceedingly rare for Democrats to even discuss foreign-policy and national-security issues during their weekly caucus lunches.

Democratic operatives say that the party is likely to eventually attack Trump’s foreign policy, with a focus on Trump’s withdrawal from the nuclear deal with Iran and the Paris climate agreement. Murphy specifically cited Trump’s sudden announcement of a rapid U.S. pullout from Syria, his posture toward Saudi Arabia after the Khashoggi killing, and his reversal of new sanctions against North Korea — all of which have drawn stern responses from GOP lawmakers.

But Murphy said Democrats — including his former colleagues in the House — should do more to force votes that pit GOP lawmakers against Trump and expose the bipartisan opposition to his agenda.

“Every single one of these big foreign policy missteps is an opportunity for Democrats to trumpet. And we don’t seem to be doing that,” Murphy said. “We don’t agree with the president, but we don’t really make [Republicans] step out onto the record.”