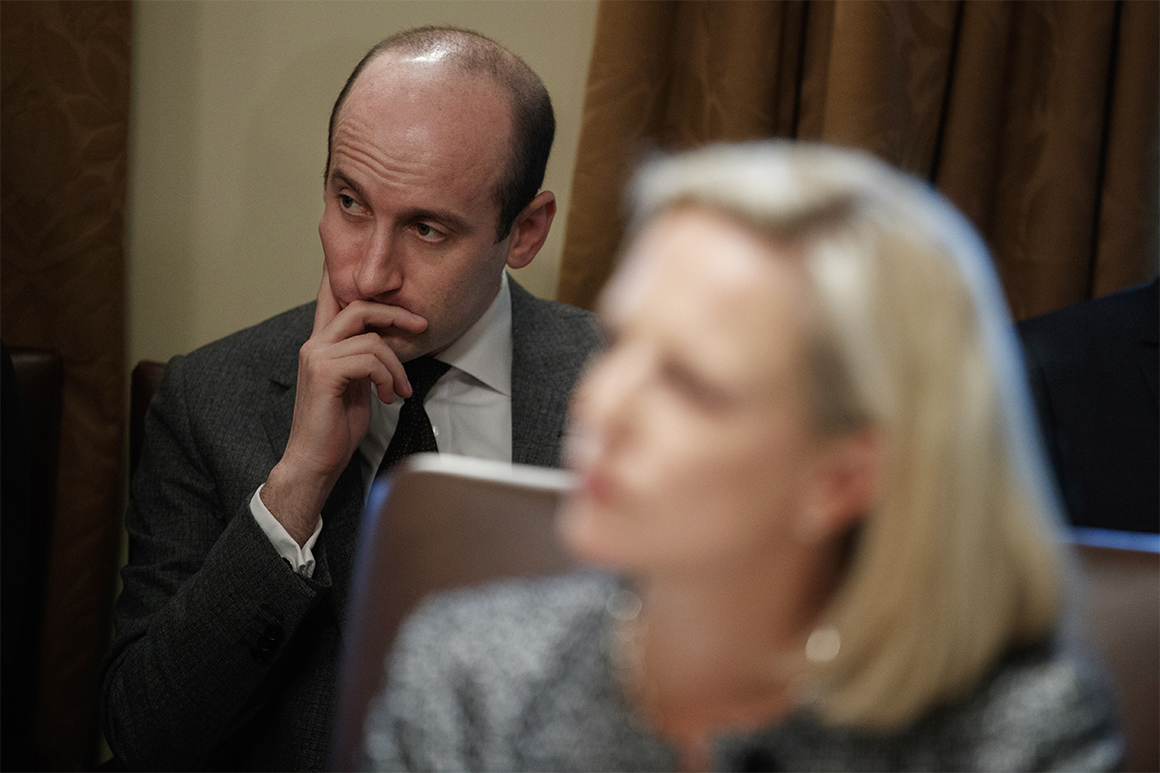 Frustrated by the lack of headway on a signature Trump campaign issue, the senior White House adviser has been arguing for personnel changes to bring in more like-minded hardliners, according to three people familiar with the situation — including the ouster of a key immigration official at the Department of Homeland Security, whose secretary, Kirstjen Nielsen, announced on Sunday that she is resigning.

Miller has also recently been telephoning mid-level officials at several federal departments and agencies to angrily demand that they do more to stem the flow of immigrants into the country, according to two people familiar with the calls.

The pressure comes as Trump, who forced a government shutdown over his demand for a Mexican border wall, is again making immigration the central theme of his presidency; last week, Trump backed off his threats to shut down the border entirely.

The officials at the Departments of Homeland Security, Justice and State, who each handle different parts of the immigration process, were initially surprised that a high-ranking White House official like Miller would call them directly, rather than contact their bosses.

“It’s intimidation,” one of the people who was briefed on the calls told POLITICO. “Anytime you get a call like this from the White House it’s intimidation … Under normal circumstances, if you were a deputy in one of these agencies, it would be very unusual.”

“There’s definitely a larger shakeup abreast being led by Stephen Miller and the staunch right wing within the administration,” said a person close to Nielsen, who resigned Sunday after months of pressure from a president who felt she was not tough enough on illegal immigration. “They failed with the courts and with Congress and now they’re eating their own.”

It was not immediately clear whether Miller played a role in the departure of Nielsen, who resigned during a Sunday evening meeting with Trump and whose approach to border enforcement often exasperated Miller and other hardline immigration reform advocates, who saw her as insufficiently bold.

A 33-year-old policy adviser and speechwriter, Miller is the Trump administration’s most influential advocate for stricter immigration policies. He uses his close relationship with Trump and tight ties to conservative media to shape the president’s thinking. But he has kept a relatively low public profile in recent months, even as Trump has hammered constantly at what he calls a “crisis” on the southern border, where illegal crossings have recently surged.

But critics of Trump’s policies and personnel moves believe that Miller may be playing an instrumental role. Several members of Congress, unhappily surprised by Vitiello’s withdrawal, and have been asking administration officials and lobbyists for an explanation.

Miller and the White House didn’t respond to a request for comment.

Miller also has been pushing for Trump to fire Lee Francis Cissna, director of U.S. Citizenship and Immigration Services, who has overseen implementation of some of the administration’s lesser-known immigration policies, including green card reforms and changes to how the federal government processes and admits refugees.

“He’s actively trying to put in place people who have very different points of view than the current leadership within the agencies,” said a former DHS official familiar with Miller’s efforts. “His idea is basically [to] clean house.”

Miller also appears to have played a role in Trump’s surprise move on Friday to withdraw his nomination of acting U.S. Immigration and Customs Enforcement Director Ronald Vitiello, whom he had moved to install permanently, saying he wanted to take the agency in a “tougher direction."

Miller had informed the president days before he pulled Vitiello’s nomination that the acting ICE chief had reservations about closing down the southern border, which Trump has recently threatened to do against the recommendation of some of his top economic advisers and policy aides.

“He thinks we can be tougher — that if we only can do more tough talk this may stop,” said another person close to DHS.

The decision to pull Vitiello’s nomination came as a surprise to Nielsen, who protested the move, according to two people close to the situation. It also shocked Republicans on Capitol Hill.

“It’s kind of a kick in the face to ICE in the middle of a very difficult period,” said a congressional aide. “There’s understandably a limited bench for people who are willing and able to do the job.”

Several Republican members of Congress have called the White House to question Vitiello’s withdrawal, according to two people familiar with the phone calls.

“There’s a worry now that there’s an erosion of people that actually have operational judgment that can at least provide the president with counsel about what will be some of the negative consequences for some of these ideas,” said a person close to DHS.

Miller’s efforts to oust Cissna from his post, meanwhile, have frustrated even some of the White House aide’s usual allies.

“If there’s anyone worthy of the White House’s ire on the immigration issue, it certainly isn’t Francis Cissna,” said RJ Hauman, government relations director at the Federation for American Immigration Reform. “A change at the top of USCIS would be a colossal mistake.”

But Miller has left some officials feeling as though they, too, could be in jeopardy if they don’t pursue a more aggressive approach to border control. His calls to several officials — including Craig Symons, chief counsel at USCIS; Carl Risch, the assistant secretary of State for Consular Affairs; ICE deputy director Matthew Albence; and Kathy Nuebel, policy and strategy chief at USCIS — have sometimes included discussions about poor work performance among colleagues, according to a source briefed on one such conversation.

Last week, as Trump threatened once again to shut down the border — a threat he later walked back, saying he would instead impose auto tariffs on Mexico if immigration and drug trafficking is not curtailed — Miller held a conference call with immigration activists to explain the administration’s position and answer questions.

He has told allies that the administration is out of ideas about how to stem the migrant tide at the border, according to a source familiar with the conversations.

The number of family members intercepted at the southwest border soared in March, according to preliminary CBP statistics. While overall arrests remain below the higher levels of the 1980s, 1990s and early 2000s, the Trump administration argues families and children present unique humanitarian and security issues.

Trump officials have also recently discussed creating an immigration “czar” — a single official who would oversee the issue across dozens of departments and agencies. The position would not require Senate confirmation.

Eliana Johnson and Ted Hesson contributed to this story.