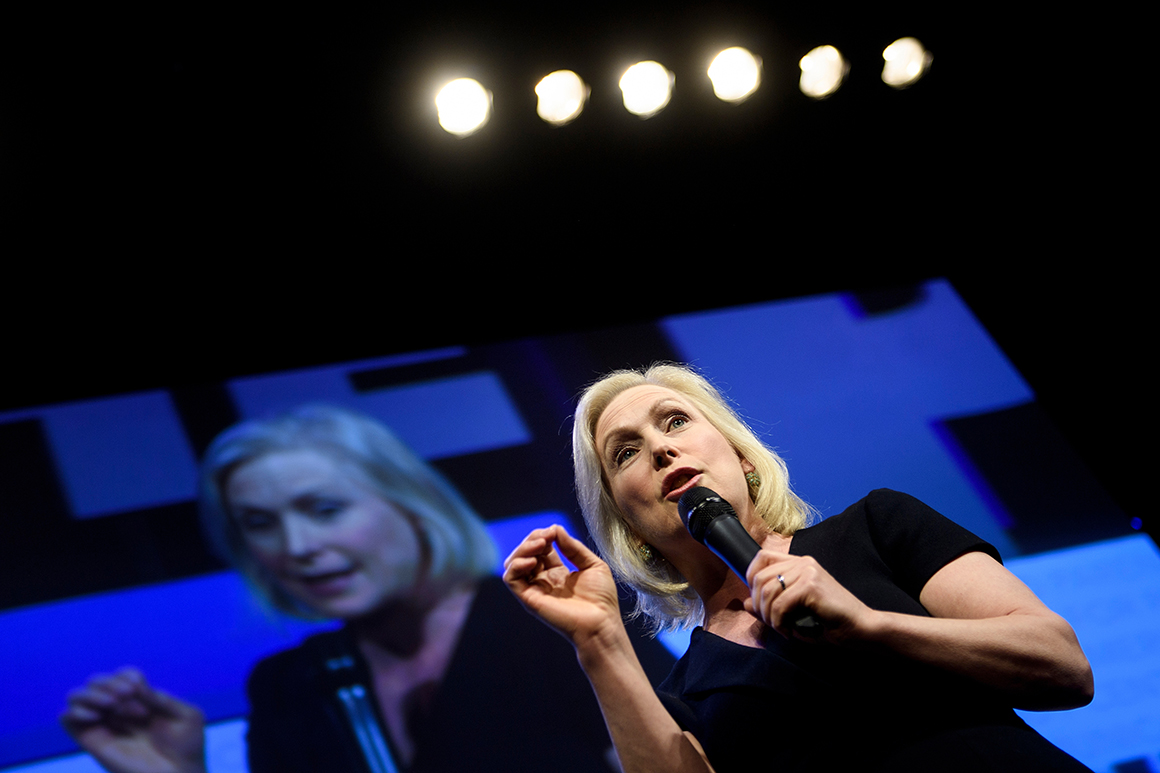 In her first years in the Senate, Kirsten Gillibrand traveled to major cities across the country to start female-centric donor circles to elevate women in politics, harkening back to her own political awakening as a donor in a male-dominated space.

Now, the New York Democrat is returning to those groups — some of which now contribute over $1 million to candidates per election — and asking them to help make her the first female president of the United States.

Gillibrand has visited more than a half-dozen groups in the Electing Women Alliance, a loose coalition of donor circles, early this year as she and Democratic presidential contenders tapped their financial networks to make early shows of strength. The groups have hosted Gillibrand in Denver, San Francisco, Austin and New York, and another event is coming up in Los Angeles in May.

The donor circles are a key asset for Gillibrand, who has struggled to break out of the pack of presidential candidates so far this year. Not only have they provided seed money for Gillibrand, who has not yet released her first-quarter fundraising totals, the groups are also emblematic of the building blocks that Gillibrand is seeking to power her campaign, which she has described as “women-plus.”

“It’s a secret weapon for her,” said Giovanna Gray Lockhart, a Democratic donor and former Gillibrand aide who hosted the senator in New York City in January. “She’s got a national network of women helping to support her, and when you’ve got a field this wide, that’s really important.”

But Gillibrand doesn’t have an exclusive hold on these donors, reflecting the massive field of candidates Democrats have to pick from, including several other high-profile women. Instead, the donors are following Gillibrand’s advice from 2004, when the young corporate lawyer encouraged fellow Democrats to spread their support around to the entire Democratic presidential field.

“What we’re doing is encouraging all of our members and donors to consider supporting all of the women, or multiple women, early in the race,” said Stacy Mason, who leads the San Francisco group of female donors and hosted Gillibrand earlier this year. “We have multiple women who are in a top tier in a presidential race, that’s never happened before.” 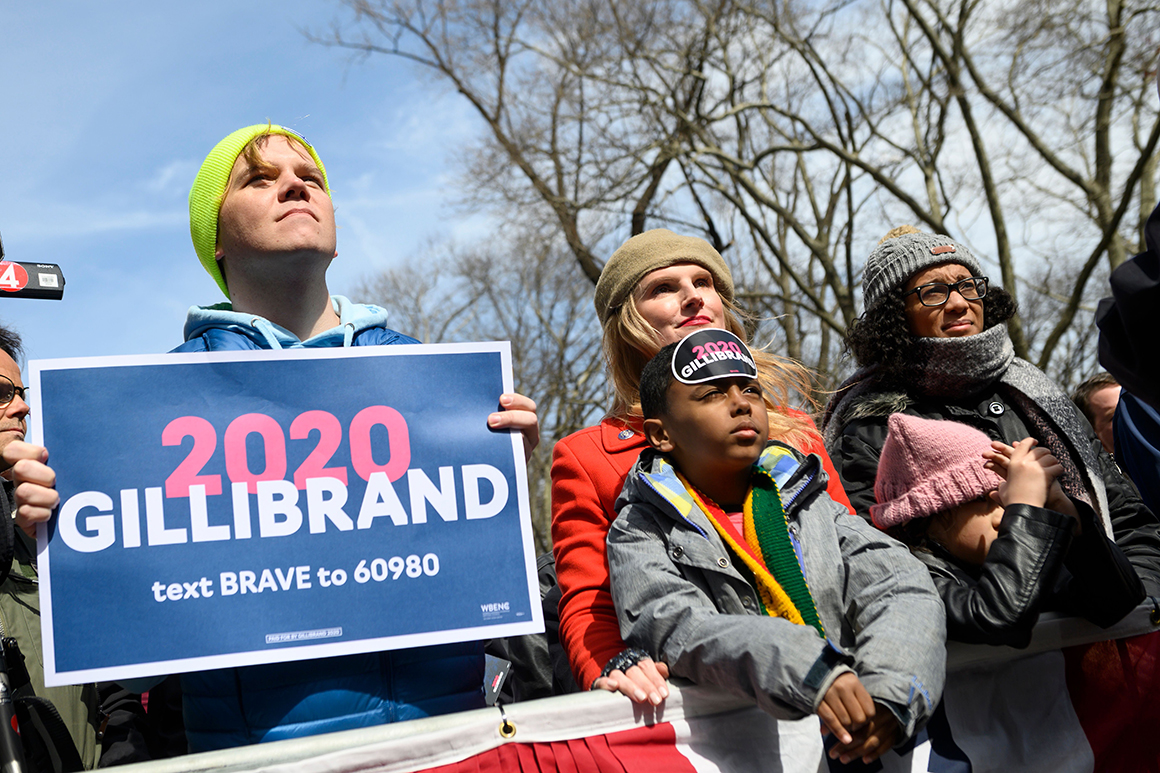 There are now 15 chapters of the Electing Women Alliance from coast to coast. The groups range in size from dozens to more than a hundred women who gather for fundraisers with candidates for federal office, and many of the groups plan to host the candidates for president. In addition to raising money, the groups often serve as an on-ramp for female professionals – some of whom have significant capital, but little experience attending fundraisers – into the world of political giving, the groups told POLITICO in interviews.

Often, Gillibrand helped seed the groups by encouraging friends in different cities to get together and begin hosting candidates in their living rooms for female-only events. The idea was inspired by a similar group in Denver, called Electing Women PAC.

In Austin, Gillibrand helped to hatch plans for a new giving group during a fundraiser two years ago at the home of Aimee Cunningham, the group’s now-leader.

“Kirsten started talking about how powerful it is for women to raise money,” urging the group that “’you could do this here, too,’” Cunningham recalled. About 20 women in the group responded to a show of hands, asking who would join a female-only group of donors.

But like the Democratic primary electorate, donors in the Austin donor circle are “going to have 15 different opinions” on the presidential race, said Cunningham, a Democratic bundler who is personally supporting Gillibrand’s bid. “It’s exciting to me seeing more women stepping up to run and stepping up to volunteer.”

Cunningham hosted Gillibrand for a fundraiser that was attended by members of the Austin group — but that group plans to stay “pretty narrowly focused on the Senate” for now, Cunningham said. In San Francisco, the group plans to back all the top female presidential candidates: It threw fundraisers for Kamala Harris and Amy Klobuchar earlier this year, a strategy that Gillibrand “supported,” which “is consistent with her philosophy and commitments” to “promote women and support women,” said Mason, the group’s leader.

“‘If you want a woman to be on the ticket, give to all of them,’ that’s what she always says,” said Stefanie Conahan, Gillibrand’s finance director.

In February, Gillibrand greeted potential donors at two events in Denver, including an evening reception that cost $1,000-per attendee and a small-dollar meet-and-greet. Gillibrand pitched potential supporters by sharing her political origin story, echoing her stump speech and “placing herself in the context of the Women’s March, the resistance, and why that movement matters in taking on the president,” said Heather Lurie, a Democratic fundraiser who worked with Gillibrand’s leadership PAC, Off the Sidelines, to start the Electing Women Alliance.

“She’s able to very clearly explain why she can go up against Donald Trump,” Lurie said.

“Women donors want to give to whomever is going to beat Donald Trump, and women donors won’t just give to other women,” said one Democratic consultant, granted anonymity to discuss internal party dynamics. “They’re going to show up on a bunch of these financial reports – some for female candidates, some for male candidates.”

Gillibrand’s pitch to well-connected female donors tracks with her distinctly feminist message for her presidential run, focusing on her oft-repeated pledge that she will “fight for your kids as hard as I fight for my own.”

In some cases, Gillibrand’s track record on women’s issues has blocked paths to the donor community: Some Democratic donors have expressed frustration about her call for former Minnesota Sen. Al Franken to resign in 2017, after more than a half-dozen allegations of sexual misconduct. Gillibrand, for her part, has often said that “if there are a few powerful Democratic donors who are angry,” then “that’s on them.”

“Some are really excited about her, while others are still unhappy with the way she handled Franken,” said one Los Angeles-based fundraiser, who characterized the southern California crowd as “mixed” on Gillibrand. “But for the donors who are interested in Gillibrand, they’re just as interested in Kamala Harris or Elizabeth Warren. There are just a lot of strong options.”

But Gillibrand carefully cultivated her connection to this network over years and will have advantages in these circles, said former Rep. Donna Edwards (D-Md.).

“Those circles do function independently and are probably going to support several candidates, but as a founder and an incubator for a lot of these groups, she has a lot of advantages within those circles,” said Edwards, who raised money from these groups for a Senate primary campaign in 2016. “Gillibrand’s has long been committed to making sure women run for office and they have the financial support to do it, and she’s probably putting that to good use for her presidential run.”