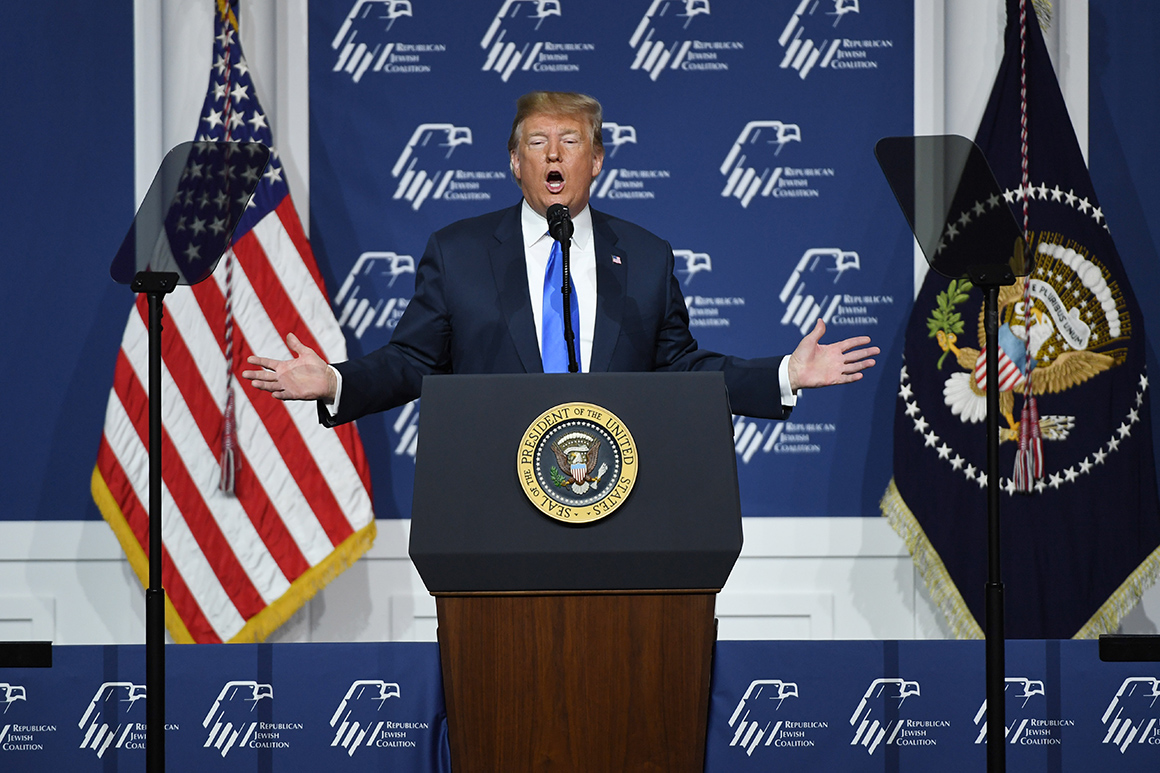 LAS VEGAS — Speaking before a crowd of influential GOP donors and Jewish Republicans, President Donald Trump on Saturday accused Democrats of mistreating Israel and allowing the “scourge of anti-Semitism to take root” in their party.

“Democrats are advancing by far the most extreme, anti-Semitic agenda in history,” Trump said. “If implemented… the Democrats radical agenda could very well leave Israel out there all by yourselves.”

In remarks at an annual conference hosted by the Republican Jewish Coalition, which endorsed Trump in 2016 and has spoken glowingly of his administration during his first two years in office, the president riled up the crowd by tearing down his political opponents one-by-one.

Taking direct aim at freshman Democratic Rep. Ilhan Omar, a Somalian-born Muslim congresswoman who’s been rebuked by Republicans and members of her own party for comments perceived as anti-Semitic, Trump jokingly thanked her at the outset of his remarks.

“Special thanks to Representative Omar of Minnesota. Oh, I almost forgot. She doesn’t like Israel… I’m so sorry!” Trump quipped, as an audience in the gilded Venetian Hotel booed the congresswoman’s name.

The hour-plus speech hit on all the campaign themes that Trump has been touting as he enters the 2020 fray.

He reassured the crowd that Republicans will soon become “the party of healthcare,” a claim that has baffled some top GOP lawmakers in recent days who have hoped to avoid wading back into the divisive issue after failing to repeal and replace Obamacare in 2017. He also spoke about the flow of immigrants across the U.S.-Mexico border, including asylum seekers from Guatemala, Honduras and El Salvador, claiming that his administration has been unfairly criticized for moving to cut off aid to the Central American countries.

“I’ve taken a lot of heat from the stupid people,” Trump said. “What about building our own country for a change?”

And in what has become a big applause line for Trump since Rep. Alexandria Ocasio-Cortez (D-N.Y.) introduced her climate change initiative known as the Green New Deal, Trump complained about the menu of “socialist” policies that he claims Democrats are pushing Americans to embrace.

People would have to take “trains to Europe, Hawaii and Australia,” Trump claimed as he criticized Ocasio-Cortez’s resolution — proposed by “a wonderful young bartender, 29 years old,” he added derisively.

Earlier in the day, the president on Twitter denounced special counsel Robert Mueller’s probe into Russian collusion as well as Democratic-led investigations into his administration. However, he notably avoided the topic while speaking to the Jewish Republicans.

Trump’s remarks to the Jewish crowd come less than a week after he hosted embattled Israeli Prime Minister Benjamin Netanyahu at the White House for ongoing discussions about a Middle East peace agreement and Iran. Netanyahu is currently facing allegations of corruption and accusations that he used his position as Israel’s top elected official for personal gain. At one point on Saturday, Trump asked the crowd how they thought the Israeli leader would fare in his upcoming bid for re-election.

“I think it’s going to be close. Two good people,” Trump said, as the crowd yelled “Bibi” to voice their support for the incumbent, Netanyahu.

The president also recognized conservative mega-donor Sheldon Adelson and his wife, Miriam, to whom Trump recently awarded a presidential Medal of Freedom. The 85-year-old Adelson, who has been undergoing cancer treatment, hadn’t been expected to be in attendance Saturday. But those close to the Casino mogul, who with his wife gave over $120 million to GOP causes in the 2018 midterms, said he decided that he wanted to make it to the gathering.

Adelson, who arrived in a red “Make America Great Again” baseball cap, received a standing ovation from the crowd, many of whom wore kippahs or other apparel embellished with Trump’s name or iconic campaign slogan.

Trump’s trip to the West Coast, where he continues to suffer from sky-high disapproval ratings, began Friday, when he traveled to Calexico, Calif., to tour a segment of the border that was recently upgraded for security purposes. He participated in a fundraising event late Friday before reportedly dining at a golf club he owns in Rancho Palos Verdes.

A group of pro-Palestine activists attempted to disrupt the president’s speech early on Saturday, but were escorted out as the large audience drowned them out with chants of “four more years” and “USA!”

Trump carried on unfazed, ticking through a series of campaign promises related to Israel that he has fulfilled since taking office, and reminding the crowd that one of those promises — his withdrawal from the 2015 nuclear accord with Iran — is being threatened by Democratic presidential contenders.

“Unlike other presidents, I keep my promises,” he said, citing his decision to relocate the U.S. embassy from Tel Aviv to Jerusalem as an example of a “historic action that had been decades in the waiting.”

Trump used his remarks to generate enthusiasm for his own re-election bid, but also for congressional Republicans who face tough races in 2020 and were dealt a major blow last November when Democrats won back the House of Representatives.

“We need more Republicans,” he said, thanking audience members for their “outstanding commitment to our country” and to helping “lead our party to another historic victory” next fall.