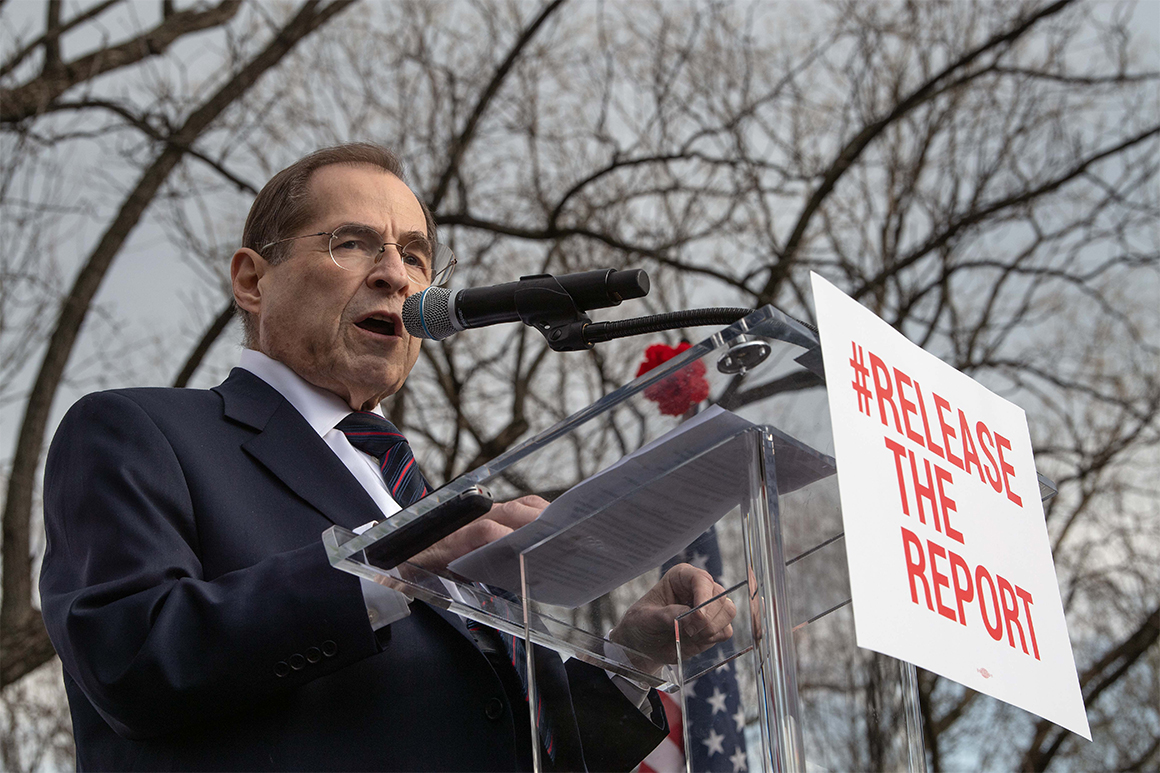 Do Democrats have to begin the process of impeaching President Donald Trump in order to access special counsel Robert Mueller’s secrets?

That legal debate began raging inside the House Judiciary Committee on Friday after a new federal court ruling suggested that Congress’ access to some confidential evidence — like the kind obtained by Mueller — hinges on lawmakers launching a “judicial proceeding.”

Republicans on the committee say the only “judicial proceeding” Congress can lead is an impeachment inquiry — a claim they say is backed up by legal precedent and history. Democrats would have to launch one against Trump if they want Mueller’s grand jury evidence, Republicans say.

That interpretation would be problematic for Democratic leaders in Congress, who have little interest in launching a politically explosive impeachment process at the moment. Speaker Nancy Pelosi (D-Calif.) has said it’s not worth the House’s time and other top Democrats have said it’s premature while they conduct their own investigations and await the details of Mueller’s findings.

But it’s a fight that could animate the next few weeks and months as Democrats attempt to pry loose as much information from Mueller’s probe as they can. They’re still awaiting access to a redacted version of Mueller’s 400-page report, which Attorney General William Barr has indicated he’ll deliver by mid-April. But Democrats say Congress must see an unredacted version of the report and Mueller’s underlying evidence — even if Barr has to get a judge to unseal the grand jury material it contains.

That effort was complicated Friday by a D.C. Circuit Court of Appeals ruling that said judges are not permitted to unseal grand jury information at their own discretion but rather must follow existing court guidelines that limit the disclosure of such material. Those guidelines have been used to share grand jury material with Congress “preliminary to or in connection with a judicial proceeding.”

The meaning of that phrase is likely to become a flashpoint in Congress’ battle over the Mueller report. Complicating the matter further, the 2-1 court decision may not be the final word legally on the issue if the full D.C. Appeals Court or the Supreme Court takes it up. But in the meantime, the Justice Department is hailing the ruling as a legal victory, a potential indication that it intends to hew closely to the traditional secrecy of grand jury matters.

Democrats have been demanding access to Mueller’s grand jury evidence for weeks, arguing it’s essential for them to review potentially damning information about Trump and his campaign’s contacts with Russians during the 2016 campaign, as well as evidence that Trump may have worked to obstruct the investigation. They note that Republicans joined them earlier this month in a 420-0 House vote to call for making Mueller’s “full report” available to Congress

Barr is also expected to redact other categories of evidence from Mueller’s report, including classified material, material related to ongoing investigations and other details he deems damaging to "peripheral third parties" who aren’t charged with any crimes. Democrats say they should get to see all of the information in those categories as well even if the broader public doesn’t. Republicans, they note, received access to voluminous information in each category when they opened inquiries into how the FBI handled the Russia probe and the investigation of Hillary Clinton’s email server. But grand jury information is the only category Barr is filtering out of the report that Democrats say would require judicial permission to reveal to Congress.

Judiciary Committee Democrats are also pushing back against the notion that impeachment would be a requirement to get Mueller’s grand jury evidence. Democrats say courts haven’t ruled out other avenues that would count as “judicial proceedings.”

“I can understand why Republicans would like to interpret this morning’s decision as cutting off all access by congress to these materials. There’s probably something very damaging to the president there,” said a Democratic Judiciary Committee counsel. “But no court, including the D.C. Circuit in this morning’s case has ever held that Congress must be in an impeachment proceeding in order to access grand jury materials.”

“As a legal matter, the Judiciary Committee has always had access to grand jury material involving questions of presidential misconduct, and I can’t imagine the courts ultimately deciding otherwise in this case,” said Julian Epstein, who was the committee’s chief counsel in 1998, when Democrats received Starr’s grand jury evidence. “This Republican gamesmanship of wanting an impeachment declaration is childish form over substance, and the courts will not likely bow to that kind of rhetorical legerdemain.”

The House Intelligence Committee may have a claim to the information as well, said Barb McQaude, a former U.S. attorney for the Eastern District of Michigan, in a call with reporters. "One of the other exceptions to the grand jury secrecy rule is that an attorney for the government may disclose grand jury material to a federal official whose job includes foreign intelligence work," she said.

But the fight, at least publicly, has played out entirely within the Judiciary Committee so far. Nadler has pleaded with Barr to petition a court to grant Congress access to Mueller’s grand jury material. So far, Barr has not responded to this request. A former Republican chairman of the committee, Rep. Jim Sensenbrenner (R-Wisc.) said he would happily join Nadler in court if the committee asks a judge to make the material public. But it’s unclear if other Republicans on the panel agree with Sensenbrenner’s position.

Committee Republicans also say Nadler’s comparison to Starr is off base. Starr was operating as an independent counsel under rules that required him to turn over to Congress anything that could be relevant to an impeachment inquiry. Those rules are no longer in effect, and Mueller was operating as an employee of the Justice Department, which prohibits the disclosure of grand jury material.

“The Democrats have no precedent for what they seem to be doing. The law is against them, and this morning’s ruling further solidified that fact,” said a Republican Judiciary Committee aide. “Why are Democrats desperate to invent new law instead of taking the clear, legal option before them?”

William Moschella, who was a Republican counsel at the time, said Democrats simply lack a legal precedent to receive grand jury material.

Barr would be violating his responsibilities if he pursued releasing grand jury evidence to Congress, GOP lawmakers say. And both Starr and Nixon special prosecutor Leon Jaworski provided material to Congress in the context of impeachment.

“If I’m right, then any theory [they] are pursuing is novel and untested,” Moschella said. “Courts don’t like novel and untested theories, particularly where significant constitutional separations of power questions are at issue.”

“Certainly,” he added, “their legal hand is strengthened if the House by resolution authorizes an impeachment inquiry.”