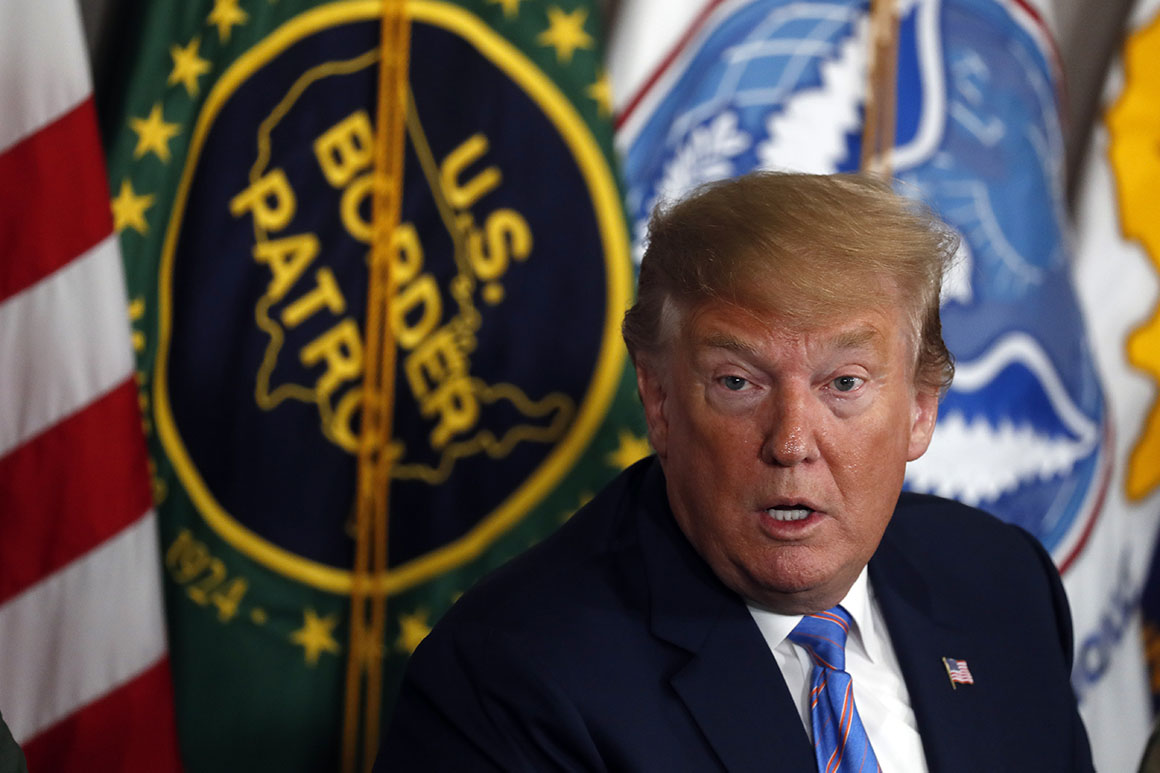 President Donald Trump’s announcement Thursday that he would be willing to sideline a new trilateral trade pact with Canada and Mexico — a move that would allow him to impose the auto tariffs he has been threatening to unveil — couldn’t have come at a worse time for Mike Pence.

As Trump sat in the Oval Office, telling reporters that border security “is more important to me than the USMCA,” the administration’s proposed replacement for NAFTA, his vice president was hours away from kicking off a multi-state tour to promote the renegotiated trade deal.

The tour, which targets states that will be crucial to the president’s re-election bid, would begin in Pence’s home state of Indiana at Lamb Farms Inc., a family-run business producing a trio of crops — corn, wheat and soybeans — that have been swept up in Trump’s trade wars.

In the coming weeks, Pence will “travel all over to swing districts selling [the president’s] trade message,” a senior White House official told POLITICO, outlining a schedule of stops in farm towns and agricultural regions across Ohio, Virginia, Pennsylvania, Minnesota and other 2020 battlegrounds.

“It’s a legislative effort in that he’s trying to garner support in moderate Democrat districts — ones that [Trump] won — but also political in that he’ll be touting what Republicans have accomplished” during the president’s first two years in office, the official said.

The same official said Pence was "not at all" bothered by the president’s comments because the White House believes Mexican officials are "showing good faith so far and will continue to work with us so further action won’t be necessary."

But Trump’s remarks on Thursday raised fresh questions about the status of his trade deal with Mexico and Canada, a revised version of the 1994 North American Free Trade Agreement that is expected to encounter major roadblocks as the administration attempts to muscle it through Congress by summer. House Speaker Nancy Pelosi has refused to consider the USMCA until Mexico has implemented a major labor law overhaul. And lawmakers from both parties are worried about moving forward without first lifting the steel and aluminum tariffs that Trump imposed last May.

Some House Democrats have raised concerns about whether the deal’s labor and environmental standards are enforceable. Other lawmakers worry that provisions in the deal could lock in high prescription drug prices. Democrats also want the deal altered to ensure that disputes between countries can be fully enforced through tariff retaliation.

The updated trade deal also includes agreements that have already taken effect that effectively bar the U.S. from imposing new auto tariffs on its North American neighbors, meaning Trump would run afoul of the agreed-upon guidelines if he moved to slap import taxes on vehicles from Mexico a year from now — something he has vowed to do instead of closing the southern border if the country fails to curb the “massive amounts of drugs” flowing across the border into the United States.

“We’re going to give them a one-year warning, and if the drugs don’t stop… we’re going to put tariffs on Mexico and products, in particular, the cars… and if that doesn’t stop the drugs, we close the border,” Trump said Thursday, teasing a “massive” auto tariff of 25 percent.

Trump’s threat to back out of the auto deal with Mexico could give the country reason to be reluctant about ratifying the overall agreement. Some experts say Trump’s cavalier attitude may also make it harder for China to reach a deal if Beijing is unsure the president will keep his word.

Amid the growing uncertainty surrounding the USMCA, Pence has turned to talking up the prospect of an imminent and historic trade deal with China, as well as with other major U.S. trading partners.

“What I heard today here, consistently, is real urgency — that the farmers who always are land-rich and cash-poor have been feeling the weight of low commodity prices. They’ve been burning through capital, burning through equity, so it’s imperative that Congress act… to ratify the USMCA so that they know and have certainty about access to the Canadian market, to the Mexican market,” Pence told reporters following his event at Lamb Farms.

American farmers have been grappling with sinking commodity prices, in part, because of the ongoing trade disputes Trump is entangled in with China and other countries. Soybean farmers faced an especially tough year in 2018 after being blocked from foreign markets, according to statistics released last month by the U.S. Department of Agriculture, which found that 80 percent of the industry’s annual harvest was sitting in storage last December. The problem became so bad that the Trump administration made created a $12 billion program last September to bail out farmers being impacted by the president’s trade policies.

“We are making progress on renegotiating our entire trading relationship with China, and I want to promise you it’s going to put American agriculture and American workers first,” Pence told the farmers in Lebanon, Ind., according to a transcript provided the White House. Pence also mentioned trade negotiations with Japan and the European Union that will begin soon.

Meanwhile, Mexican President Andrés Manuel López Obrador has said he plans to approve new labor legislation by the end of this month that could boost some congressional Democrats’ willingness to seriously consider what they’ve repeatedly dubbed “NAFTA 2.0.”

U.S. Trade Representative Robert Lighthizer has also been holding meetings with key Democrats on Capitol Hill to talk through the new trade deal and address lingering concerns, one of which includes ratifying the deal while stiff tariffs on steel and aluminum imports remain in place — something Republicans have also spoken out against.

“It’s very, very important that the White House get on board on doing away with these tariffs so we can get this thing not only before the Congress of the United States, but before the Senate in Mexico and the Parliament, House of Commons, in Canada,” Senate Finance Committee Chairman Chuck Grassley (R-Iowa) said on a conference call with reporters in February.

On Thursday, Pence said he and the president are pushing for the USCMA to be approved by Congress “this spring,” an aggressive timeline that would allow Trump to tout the agreement out on the trail later this summer, when White House aides say he’s expected to step up his campaign schedule with weekly rallies. Trump threatened to withdraw from NAFTA in late December in an attempt to light a fire beneath Congress on the renegotiated version, though he has yet to follow through.

By Friday morning, however, Trump was back to tweeting about prioritizing security at the border over finalizing his trade deal with Canada and Mexico.

“This will supersede USMCA,” he wrote of ending the flow of unauthorized immigrants and illicit drugs into the U.S before hopping on a plane to a border town in California.

Sabrina Rodriguez contributed to this article.