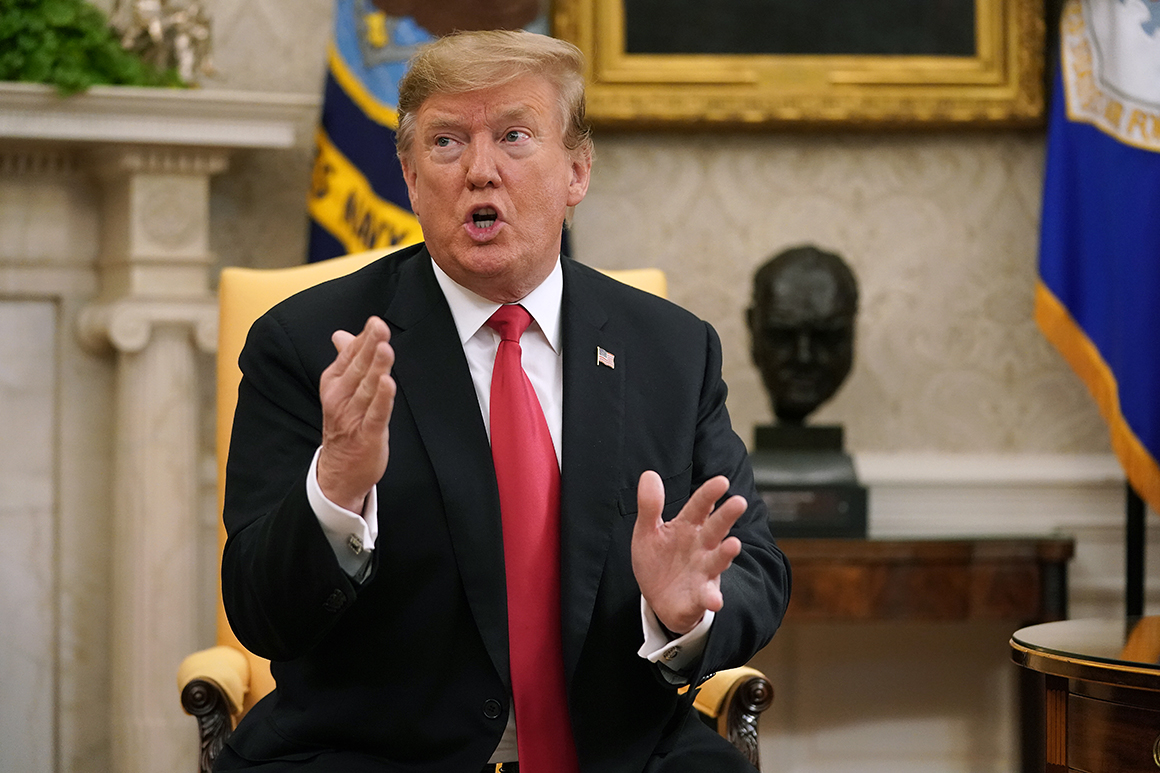 President Donald Trump said Tuesday that former Vice President Joe Biden is "being taken care of pretty well by the socialists," suggesting that a recent wave of criticism against the potential 2020 presidential candidate is the product of attacks hatched by his own party’s left wing.

Criticism of the former vice president has spiked in recent days as multiple women have come forward to say that past physical interactions with Biden, a notoriously tactile politician, left them feeling uncomfortable. While all of Biden’s accusers have said that their interactions with him were not sexual in nature, the criticism has cast a shadow of doubt over his possible entrance into the 2020 presidential race, in which he is expected to be a top contender.

Speaking at the spring fundraising dinner for House Republicans’ campaign arm, Trump jabbed at the former vice president and insinuated, like Biden’s own team has, that the accusations had been planted by a rival campaign.

“It looks like the only non-, sort of heavy socialist, he is being taken care of pretty well by the socialists,” Trump said. “They got to him. Our former vice president. I was going to call him — I don’t know him well. I was gonna say, ‘Welcome to the world, Joe. Are you having a good time, Joe?’”

Trump also joked Tuesday about asking a military general for a kiss, quipping that “I felt like Joe Biden.”

Scrutiny over Biden’s inappropriate touching first cropped up last week when former Nevada lawmaker Lucy Flores wrote an essay in The Cut detailing a 2014 incident when Biden allegedly kissed the back of her head. Since then, three more women have come forward with their own stories of being made uncomfortable by Biden’s physicality.

Democratic lawmakers and operatives have stepped forward in Biden’s defense in the last week, arguing that the former vice president’s penchant for physical affection is just part of his personality. Biden has apologized through statements to the press if he unintentionally made the women feel uncomfortable.

The stories have emerged as Biden reportedly inches closer to finally jumping into the 2020 race for president. Biden has been out of politics since before the #MeToo movement began, and the accusations ensure scrutiny will remain over his well-known hands-on style of politicking as more than a dozen Democrats jostle for the presidential nomination.

Trump’s ribbing of Biden could be a preview of further attacks to come on the former vice president, and are a sign the president doesn’t plan on staying out of the Democratic primary. The Hill reported Tuesday afternoon that the pro-Trump Great America PAC had recently placed a six-figure ad buy for a digital spot hitting “Creepy Joe” over the accusations.

But while Trump and his allies have seized on Biden’s strife, the president himself has not been immune to accusations of making unwelcome advances on women. Weeks before the 2016 election, Trump was heard bragging about kissing and groping women without their consent in the release of the Access Hollywood tape from 2007, and multiple women have accused him of sexual assault, allegations Trump has adamantly denied.