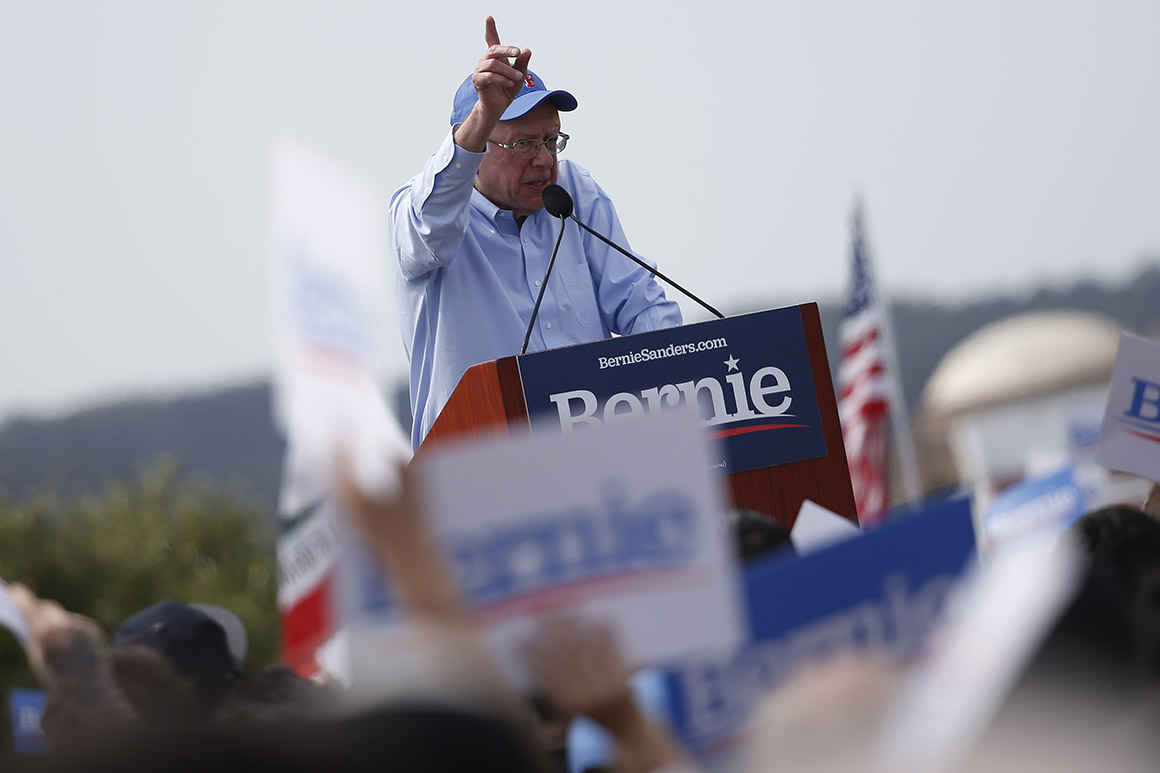 Bernie Sanders’ campaign will unveil a slate of top hires and kickoff events Wednesday — the latest sign that he plans to harness his record-breaking grassroots army earlier and more strategically than he did during his first run for the White House.

More than 1 million people have signed up to volunteer for his campaign, aides said, and the Sanders team will ask them Wednesday to host house parties across the country on April 27, a date that will double as the official launch of Sanders’ 2020 organizing program.

"If there has ever been a time in American history when our people must stand together in the fight for economic, social, racial and environmental justice — now is that time," Sanders is expected to write in an email to supporters calling on them to hold the events. "In other words, we need to create an unprecedented grassroots political movement."

The campaign will provide volunteers at the gatherings with specific strategies and methods to begin helping Sanders. The Vermont senator will tape a “special broadcast” for supporters to watch at the parties.

“Our biggest strengths are Bernie and his message and policies and the size and dedication of our volunteers,” said Claire Sandberg, the 2020 campaign’s national organizing director. “So we are very prepared to put people to work, to give them the tools to organize on their own.”

Sandberg guided Sanders’ “distributed organizing” strategy in 2016, which trained his army of supporters to mount their own phone-banking and texting efforts. According to Sandberg, that initiative led to “80,000-volunteer hosted events, 85 million phone calls, 10 million peer-to-peer text messages and also 5 million doors” knocked on in conjunction with Sanders’ field operation.

But that organizing team got off to a late start in 2016, a delay the Sanders operation is intent on not repeating.

“What people don’t realize about the program is that most of that voter contact didn’t even begin until January 2016, and it didn’t actually really achieve scale until March of 2016. We only got the machine fully up and running once by the point that it was almost too late,” Sandberg said. “So we’re very excited this time around that we’re going to give volunteers the tools to do those things right from the jump.”

Another shift: Sandberg said the campaign hopes to “give volunteers more leadership and deeper training” this time around.

Sanders’ email will offer help to those who sign up to host parties: "A member of our team will reach out to make sure you have any support you need along the way."

The top aides joining Sanders’ organizing team, led by Sandberg, are a mix of new faces and 2016 alumni.

Becca Rast will be the campaign’s national field director, after managing Jess King’s unsuccessful campaign for Congress in Pennsylvania last year. She was a board member of the Sunrise Movement, a group of young environmental activists pushing for the "Green New Deal."

Hannah Fertig, who helped steer the field and organizing enterprise for Abdul El-Sayed’s failed 2018 gubernatorial campaign in Michigan, will be Sanders’ deputy national field director. She returns from his 2016 bid.

Cole Edwards, another 2016 staffer, will be the campaign’s distributed organizing director. He had the same role during Sanders’ tour in the midterm elections.

Yong Jung Cho, who recently worked as the campaign manager for Kaniela Ing’s losing congressional bid, is taking the role of Sanders’ constituency organizing director. Notably, she was an organizing manager for one of Sanders’ current opponents, Beto O’Rourke, when he nearly upset Sen. Ted Cruz (R-Texas) last year.

Sandberg said the organizing team will add more staffers in the coming weeks.

The Sanders team is revealing its organizing kickoff plans the day after announcing it raised about $18.2 million in the first quarter of the year, more than the other three Democratic presidential candidates who have shared their fundraising hauls so far. Campaigns must file reports with the Federal Election Commission by April 15.

Sanders said he pulled in $5.9 million in the first 24 hours of his 2020 campaign, a massive number only outmatched by O’Rourke, who reported raising $6.1 million on his first day.