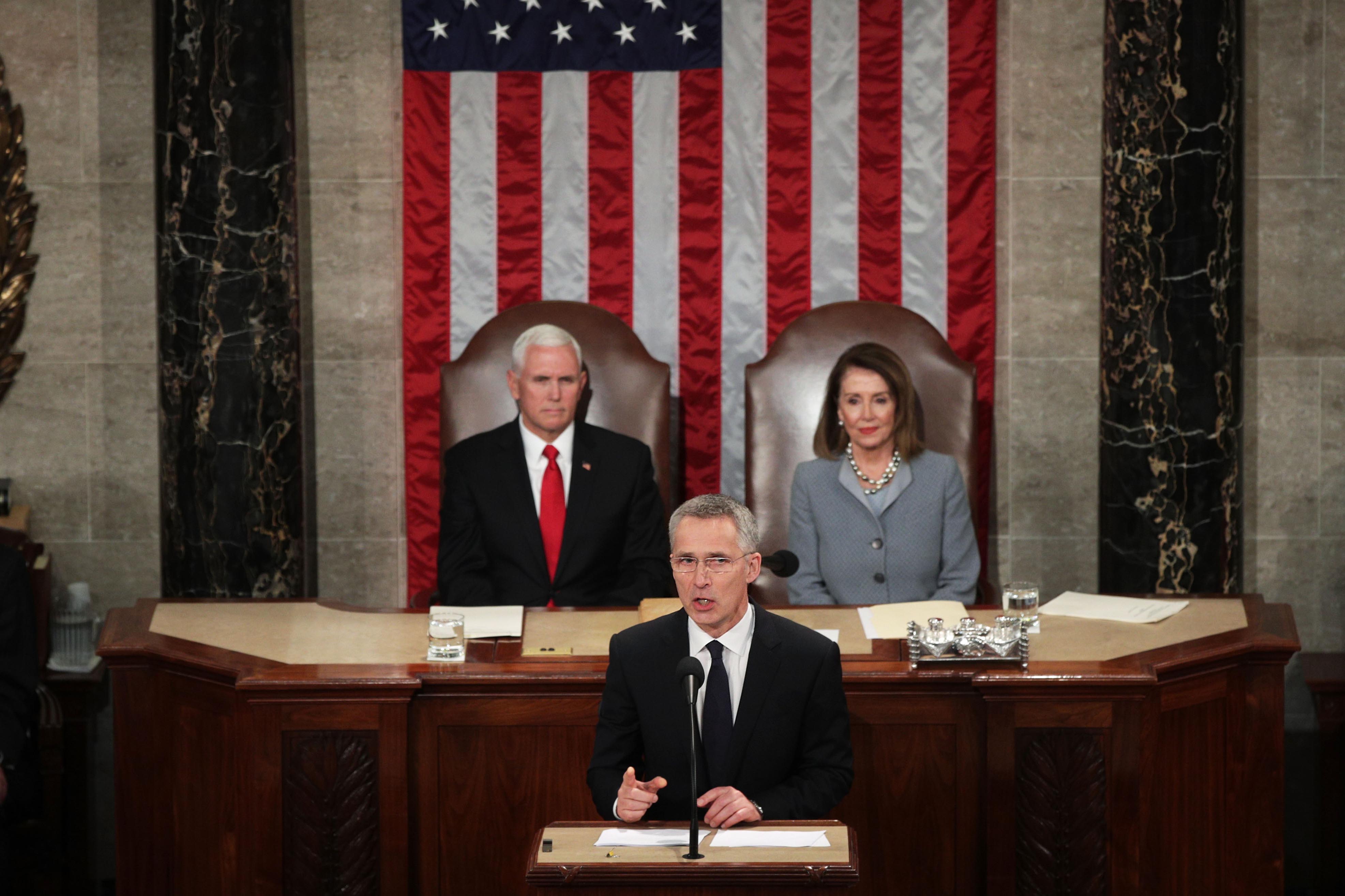 NATO Secretary General Jens Stoltenberg on Wednesday called on the defense alliance to stay united against an increasingly assertive Russia.

In rare remarks to a joint session of Congress to commemorate the 70th anniversary of NATO’s founding, Stoltenberg pushed back on President Donald Trump’s criticisms of the alliance, preaching a message of strength in unity while also praising the president’s insistence on other NATO members boosting their contributions to the alliance.

Citing Russia’s annexation of Crimea in 2014, its cyber aggression across the globe, last year’s use of a nerve agent on a former spy, Moscow’s support of Bashar Al-Assad’s regime in Syria, and its military build-up including its violation of the INF Treaty, Stoltenberg laid out measures NATO had taken to bolster its readiness and defense against Russia in recent years.

“We do all of this, not to provoke a conflict, but to prevent conflict and to preserve peace. Not to fight but to deter. Not to attack but to defend,” he said during his 40-minute-long remarks.

But, he added, “there is no contradiction between the defense and dialogue. We do not want to isolate Russia. We strive for a better relationship with Russia. But even without a relationship, we still need to manage a difficult one.”

Stoltenberg demanded that Russia come back into compliance with the INF Treaty, a pact barring intermediate-range nuclear missiles that the U.S. has already begun to withdraw from.

While Trump on Tuesday told reporters following a meeting with Stoltenberg that “I think we’ll get along with Russia,” Stoltenberg took a bleaker tone.

“We do not want a new arms race. We do not want a new cold war. But we must not be naive. An agreement that is only respected by one side will not keep us safe,” Stoltenberg said, adding that NATO would prepare for a world without the treaty but swearing off the idea of mirroring Russia’s moves.

But while the address focused on refuting some of Trump’s biggest gripes about the pact, Stoltenberg echoed Trump’s messaging on NATO defense spending, declaring Trump’s demands that allies contribute more to the pact had been successful.

“Our desire for a peaceful world is simply not enough. We must act and invest to make it so. NATO allies must spend more on defense,” he said, arguing that doing so would propel NATO toward being a fairer alliance.

“This has been the clear message from President Trump and this message is having a real impact,” he added, drawing immediate applause from Vice President Mike Pence. “Of the years of reducing defense budgets, all allies have increased a defense spending. Before they were cutting billions, now they are adding billions.”

Trump’s disagreements with the pact did not go unmentioned in Stoltenberg’s address, which stressed that “it is good to have friends” on a rapidly evolving and uncertain global stage.

“The strength of NATO is that despite our differences we have always been able to unite around our core task, to defend each other, protect each other, and to keep our people safe,” he said to bipartisan applause. “We have overcome our disagreements in the past. And we must overcome our differences now. Because we will need our alliance even more in the future. We face unprecedented challenges, challenges no one nation can can face alone.”

He also appeared to implicitly address reports that Trump has weighed pulling out of NATO altogether, warning that the alliance hadn’t endured so long for nothing.

"Our alliance has not lasted for 70 years out of a sense of nostalgia or sentiment," he told lawmakers. "NATO lasts because it is in the national interest of each and every one of our nations."