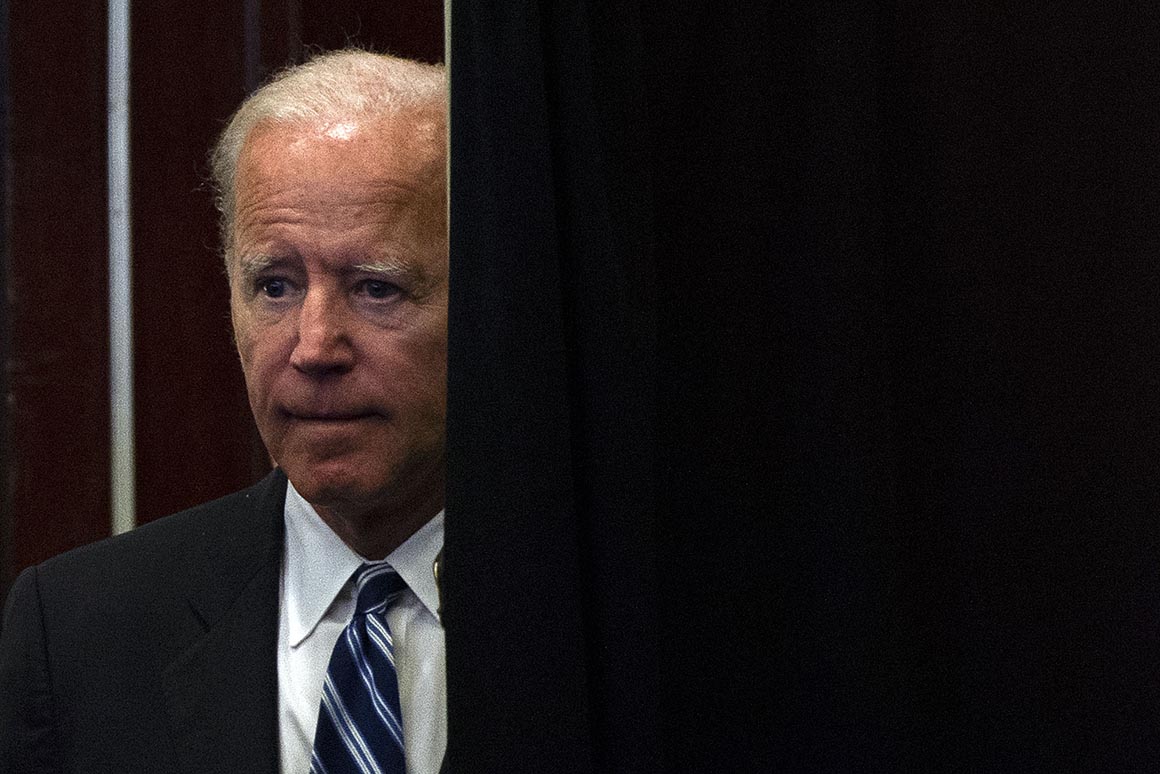 Aiming to cauterize his political wounds, Joe Biden said in a Twitter video that he’ll be more respectful of people’s personal space in the wake of numerous women accusing him of making them uncomfortable with his physical contact.

But two words were missing from his carefully crafted explanation Wednesday: “I’m sorry.”

Instead, Biden framed the context of his interactions as being part of his persona — he’s someone who handshakes and hugs and shoulder-grabs people to show support. He twice mentioned the word “responsibility” — a word which voters like to hear from candidates expressing a measure of contrition – and he said he understood times have changed.

"Social norms have begun to change. They’ve shifted,” Biden said. “And the boundaries of protecting personal space have been reset. And I get it. I get it. I hear what they’re saying. I understand it. And I’ll be much more mindful. That’s my responsibility.”

By taking responsibility — and tacitly acknowledging the gravity of the situation with a direct-to-camera video — Biden took a big step toward putting the controversy behind him. Yet by stopping short of offering an apology, he ensured that it would not go away completely.

One of Biden’s accusers said the brief Twitter video was an expertly drafted statement in avoiding responsibility while pretending to accept it.

“I guess I’m so confused. I don’t understand why he won’t directly apologize to the women that he acknowledges he made feel uncomfortable,” said Lucy Flores, a former Nevada assemblywoman and 2014 lieutenant governor candidate who drove the discussion of Biden’s behavior into the national political discourse Friday.

Flores recalled how Biden invaded her personal space five years ago by walking up behind her, pressing his nose into her hair and planting a long slow kiss on the back of her head at a political event. Three other women subsequently came forward to tell similar stories.

Following the release of the former vice president’s video, Flores released her own statement expressing frustration with his response.

‘I’m glad Vice President Joe Biden acknowledges that he made women feel uncomfortable with his unsolicited gestures of encouragement. Given the work he has done on behalf of women, Vice President Biden should be aware of how important it is to take personal responsibility for inappropriate behavior, and yet he hasn’t apologized to the women he made uncomfortable,” she wrote. “Times are changing yes, but not because once appropriate behavior is now inappropriate, but because women feel empowered to call it what it has always been — a violation of our bodily autonomy by powerful men.”

Amy Lappos of Connecticut also accused Biden of grabbing her head and rubbing noses with her during a 2009 fundraiser, a gesture she said made her uncomfortable. Two other women, Caitlyn Caruso and D.J. Hill, have also expressed their discomfort with Biden‘s touching in two separate interactions.

None of those women accused Biden of outright sexual harassment — a distinction frequently cited by Biden’s defenders. But in the era of #MeToo politics, Flores said fellow Democrats needed to talk about Biden’s behavior.

Instead, Flores contended, many Democrats and Biden allies attacked her — first by calling her a liar, then by questioning her motives and then by minimizing her experience and ridiculing it. She said that while President Trump’s transgressions have been far worse than what Biden has been accused of, the reaction by some in her party to the questions about Biden’s behavior will make it more difficult to claim a moral high ground in the 2020 presidential campaign.

“There has been a lot of hypocrisy,” Flores said. “You have women who are summarily dismissing mine and other women’s experiences – it’s not me anymore – but they have absolutely have no problem criticizing people who aren’t beloved in their own party.”

Progressive activist Rebecca Katz thought the video was effective, although she wasn’t convinced about its sincerity.

“Video is smart — Biden in his own words, but in a controlled setting. He struck a balance of being contrite without apologizing,” she said, adding that the “real test will be what he does next time when the setting is not as controlled.”

In his video Wednesday, Biden made sure to echo what his defenders have said for days — that he’s affectionate with men as well as women. And he stressed that he won’t lose his personal touch, though he’ll touch fewer people physically.

“I’ll always believe governing — and, quite frankly, life, for that matter — is about connecting, about connecting with people,” Biden said. “That won’t change. But I will be more mindful and respectful of people’s personal space.”

Amid questions about whether the controversy would affect his prospective presidential bid, Biden foreshadowed a likely announcement “in the coming month.” But in mentioning how times have changed, however, the 76-year-old career politician unwittingly drew a measure of attention to a perceived weakness in his candidacy — his advanced age — since the controversy has revealed a generational divide within the party over the propriety of his behavior.

Still, Biden’s supporters and many establishment Democrats praised the statement for hitting the right notes.

Former Iowa Lt. Gov. Patty Judge, an influential early state Democrat, rejected any notion that the party would cede its superior position on #MeToo issues if Biden were the nominee, saying there was a marked distinction between Biden’s conduct and that of President Donald Trump.

“I don’t think putting your hand on someone’s shoulder or kissing someone’s cheek rises to the level of cheating on your wives — multiple wives — and saying the kinds of things that he’s said about women and continues to objectify women. It’s day and night,” Judge said.

“Donald Trump is not held to the standard that is held to Joe Biden or Al Franken or other Democrats who are held to a higher standard than the president,” she said. “If we’re going to worry about the hand on the shoulder then we have to recognize that we have a president that admits inappropriate activity.”

Judge said she believed the video statement was the right step; Biden needed to acknowledge that the world had changed and that he had to be more aware of his actions.

Tracy Sefl, a former Hillary Clinton adviser, was among those who believed Biden needed to address the controversy. The video, she said, helped move the discussion forward.

“This is the correct response,” Sefl said. “And while some will parse his every word, I’m accepting his statement whole cloth, in the spirit of the Democratic Party and the presidential candidates together continuing to raise the bar on what’s acceptable in today’s world.”