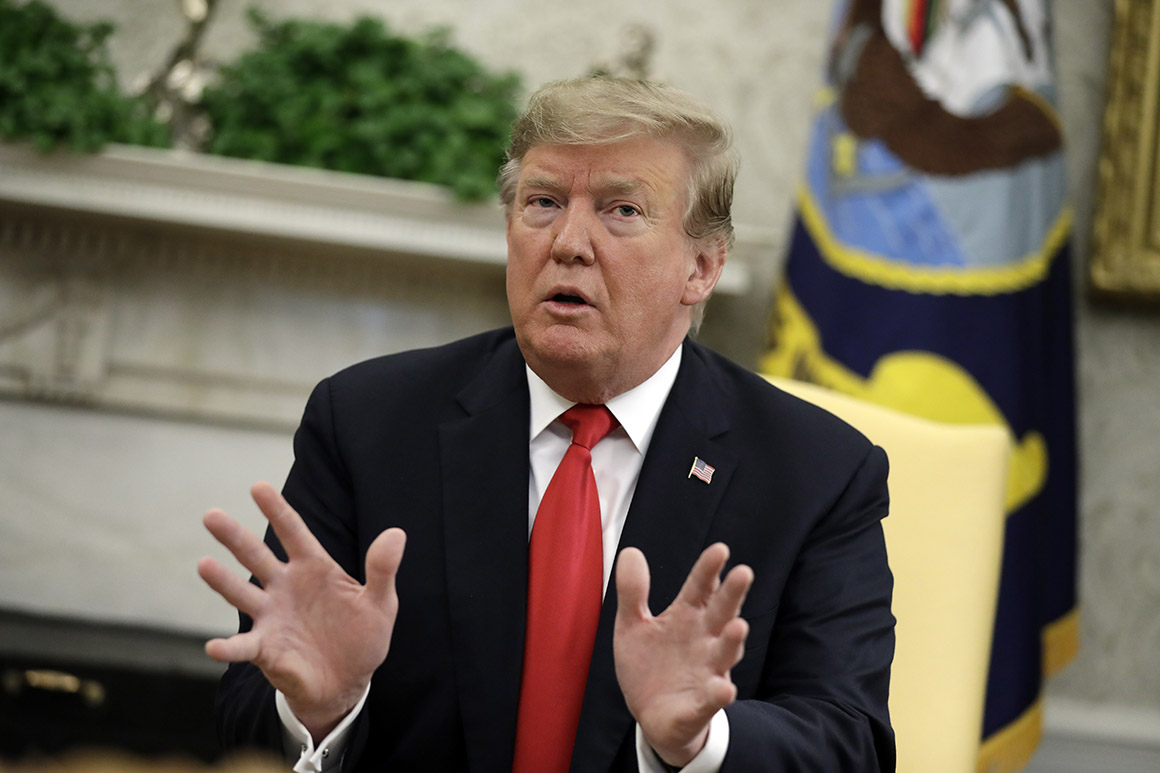 President Donald Trump appeared to backpedal on Tuesday from his initial desire for special counsel Robert Mueller’s report to be released to Congress and the public, a sharp diversion from his enthusiastic calls for the release of the highly anticipated report.

In a series of tweets, Trump disparaged congressional Democrats for their efforts to obtain the full report; noted that one of them had opposed the public release of grand jury information from independent counsel Kenneth Starr’s report on Bill Clinton; and tweeted a Fox News clip of lawyer Alan Dershowitz emphasizing that the Justice Department could keep the entire Mueller report confidential.

Multiple White House officials said Trump’s posture on releasing the report hasn’t changed, and Trump himself said Tuesday afternoon that he intends to defer entirely to his attorney general, William Barr. But Trump has unmistakably reined in his previous zeal for releasing the report publicly, which he first telegraphed last week while claiming that Mueller had “totally exonerated” him.

Though Mueller’s 400-page report is expected to conclude that no Americans criminally conspired with Russian efforts to interfere in the 2016 election on Trump’s behalf, there are indications that it will include damaging information about Trump and his associates — including evidence suggesting Trump may have attempted to interfere with the investigation.

Democrats — who are gearing up to issue a subpoena for the full report on Wednesday — said Trump’s sudden hostility toward their efforts to obtain the report suggests he’s nervous about what Mueller found.

“It looks like the president … is concerned about that. He ought to live up to what he said earlier,” said House Intelligence Committee Chairman Adam Schiff (D-Calif.) “He ought to support the full release. None of that should be redacted. But clearly he’s concerned about that coming out. If he is feeling so confident about what [the report] says, then you would think he would urge its full release. But clearly he’s not. And you’d have to ask him why.”

“The president said he wanted it to be public, too,” added Rep. Jim Himes (D-Conn.), a member of the Intelligence Committee. “So it’s not us being desperate, it’s him apparently thinking about re-trading a deal. Donald Trump re-trading a deal? Shocker.”

Trump initially celebrated the report’s conclusions, as summarized by Barr last week. But as Democrats in Congress have escalated their efforts to obtain Mueller’s report and evidence, the president is now indicating he has reservations about allowing his Justice Department to fork over the full report to lawmakers.

“There is no amount of testimony or document production that can satisfy Jerry Nadler or Shifty Adam Schiff,” Trump tweeted Tuesday morning, naming two top House Democrats seeking the report. “It is now time to focus exclusively on properly running our great Country!”

In a letter to lawmakers last week, Barr referred to Trump’s public statements about his desire for the report to be released, insisting that he would not share the report with the White House in advance to allow Trump to claim executive privilege.

But Trump’s posture on Tuesday made Democrats even more skeptical that the president will not invoke executive privilege to block the release of certain parts of the Mueller report that might make him look bad.

“Remember — there was no vow not to assert executive privilege. The attorney general said he had no intention of saying it because he was relying on the president’s public statements that he didn’t need it,” Himes said. “But no, I’ve always been skeptical that the White House was not going to make an effort to redact embarrassing information.”

“In 1998, Rep. Jerry Nadler strongly opposed the release of the Starr Report on Bill Clinton,” Trump tweeted. “No information whatsoever would or could be legally released. But with the NO COLLUSION Mueller Report, which the Dems hate, he wants it all. NOTHING WILL EVER SATISFY THEM!”

Nadler declined to comment on Trump’s attacks, but Daniel Schwarz, a spokesman for the Judiciary Committee, noted that Congress had already received Starr’s underlying evidence, and that Nadler was opposed to making such evidence public.

“Our expectation is that Attorney General Barr will be as forthcoming now as Mr. Starr was in 1998,” Schwarz said. “The attorney general should provide the full Mueller report to Congress, with the underlying materials, at which point we will be in a better position to understand what Special Counsel Mueller uncovered during his investigation.”

“They’re sore losers,” she said of the Democrats, five months after they won back the House of Representatives from Republicans. “They lost in 2016. They lost because they tried to convince all of America of something we all knew was untrue — that the president had colluded with Russia.”

Anita Kumar contributed to this story.