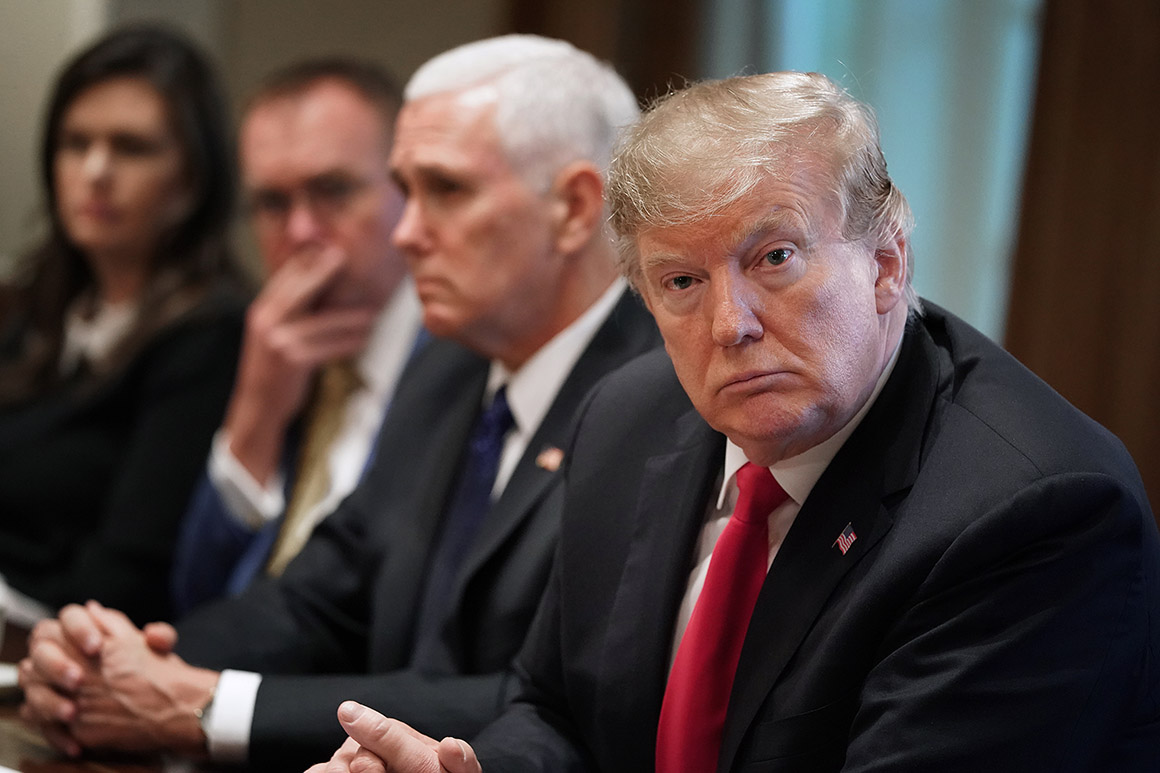 When it comes to President Donald Trump’s plans to replace Obamacare, one about face has followed another.

The president’s Monday announcement that Republicans won’t vote on an Obamacare alternative until after 2020 revealed the White House’s confusion on a top issue that is likely to play a huge role in the 2020 congressional and presidential elections.

But Trump retreated Monday after an aggressive lobbying effort by Senate Republicans, who warned in a series of phone calls that he risked driving his party off an electoral cliff by forcing Republicans to take ownership of the health care issue.

Senate Majority Leader Mitch McConnell called the president on Monday to inform him that with Nancy Pelosi running the House, there would be no GOP Senate vote on a substitute health plan for Obamacare as McConnell seeks to win reelection and bolster the chances of a handful of incumbents whose races will determine the majority.

“I made clear to him that we were not going to be doing that in the Senate,” McConnell told reporters Tuesday.

Trump’s rare reversal acknowledged dual political realities: One is that House Democrats are extremely unlikely to pass any Republican-backed health care bill. Perhaps more important, health care is a toxic issue for Republicans, who have repeatedly failed to unite behind an Obamacare alternative that would necessarily be hugely complex and filled with difficult compromises.

Republican leaders said that the campaign for Trump to roll back his pledge stemmed from unrest in the rank-and-file of the Senate.

“He’s probably realized how challenging it’s going to be and we’ve been down that road before up here,” said Senate Majority Whip John Thune (R-S.D.). “He was getting lots of input from people who have been through some of these wars up here before.”

“We couldn’t get it passed when we had the House, the Senate and reconciliation,” said one GOP senator. “The leader’s been upfront with the president about the fact that this is not going to have to a vote, we’re not bringing it up, and we’re not having a Senate working group.”

Trump has typically dug in in the face of opposition and anger from fellow Republicans on other issues. Many GOP lawmakers opposed his decision to declare a national emergency on the Southern border. Most Republicans bitterly opposed his decision to withdraw American troops from Syria, a move they have slowed but not halted. And he has imposed some tariffs and threatened others despite warnings about their economic impact.

On health care, however, Trump was more receptive than usual to the entreaties of Republican allies who said he was headed for an embarrassing defeat. In Tuesday’s GOP caucus meeting, Republicans expressed palpable relief that they would not have to imminently walk the health care plank.

“The president realized with Nancy Pelosi and the House it’s unlikely we’re going to get bipartisan cooperation,” said Sen. John Cornyn of Texas. “It was more of a nod to the reality of our times.”

Trump campaign communications director Tim Murtaugh said in an interview that the president reversed course because “there is no way the Democrats would work with President Trump on a healthcare plan that will work and provide the accessibility and affordability that he wants to offer.”

The president’s 180-degree turn also marked a defeat for acting chief of staff Mick Mulvaney and his allies, who pushed the president to back a lawsuit filed by a group of Republican state attorneys general that argues the entirety of the Affordable Care Act is unconstitutional. That move was itself a reversal of the administration’s previous partial opposition on the lawsuit.

Mulvaney, along with Joe Grogan, the director of the Domestic Policy Council, and Russ Vought, the acting director of the Office of Management and Budget, initially carried the day over Cabinet officials who urged caution. Mulvaney told Trump that supporting the lawsuit would pressure Congress to pass an Obamacare alternative and help him fulfill a campaign promise.

Some Republicans, though a minority of them, share that view, saying the party must come up with a plan before the campaign gets into full swing.

“What [Trump] is saying IS if we sit back and only criticize Obamacare without saying what our health care plan is, shame on us,” said Sen. David Perdue (R-Ga.), who credited Mulvaney with forcing the issue. “He’s out of sight out of mind to the public. But behind the scenes he’s just paddling as hard as you can imagine.”
While Republicans have railed against Obamacare for years, replacing it with their own version of a health care plan has proven a tougher target than they had hoped. Public approval of the law has ticked up over time, and a late March Public Policy Polling company survey found not only that voters trust Democrats over Republicans on the issue of health care by an 11-point margin, but that they care far more about it about other political matters such as the Mueller investigation.

Trump made the repeal of Obamacare his first order of business as president, beginning a year-long push during which the White House suffered a series of embarrassing failures. In March of 2017, then House Speaker Paul Ryan was forced to pull a bill from the House floor after realizing he lacked the votes for passage. The House eventually did cobble together a bill, but the late Arizona senator John McCain doomed its Senate passage four months later with a thumbs-down vote to which Trump still makes bitter references.

Two years later, the prospects for GOP action are no better.

“The basic situation hasn’t changed much since 2017: There are plenty of ideas on the table from conservative policy people but most Republicans in Congress have not come to terms with the tradeoffs involved and don’t know what they want and Trump just says stuff that bears no relation to reality,” said Yuval Levin, a former George W. Bush White House domestic policy aide and editor of the conservative policy journal National Affairs.

Led by House Speaker Nancy Pelosi and Senate Minority Leader Chuck Schumer, Democratic lawmakers rallied in front of the Supreme Court on Tuesday against the administration’s position on the Obamacare lawsuit. House Democrats scheduled a Wednesday vote to condemn it.

In a series of tweets tapped out after 10 p.m. Monday, Trump acknowledged the reality that Republicans had been stressing — that Democratic control of the House and a lack of GOP unity behind a single plan made near-term action impossible.

“Republicans are developing a really great HealthCare Plan with far lower premiums (cost) & deductibles than ObamaCare,” he wrote, adding: The vote on the plan “will be taken right after the Election when Republicans hold the Senate & win back the House.”

The Trump campaign said it would not be releasing a health care plan, noting that Trump himself has made his priorities clear.

Still, Trump’s new position on holding a health care vote after the election doesn’t mean work to develop an alternative will stop. That’s because Trump has now yoked himself to a lawsuit aimed at blowing up the Affordable Care Act that could detonate before the election and expose his lack of a back-up plan.

“Here’s the problem for the country: If he wins in court, that Obamacare’s unconstitutional. I think it’s better than 50/50. What do we do in 2020?” said Sen. Lindsey Graham (R-S.C.). “Somebody needs to be thinking about that.”