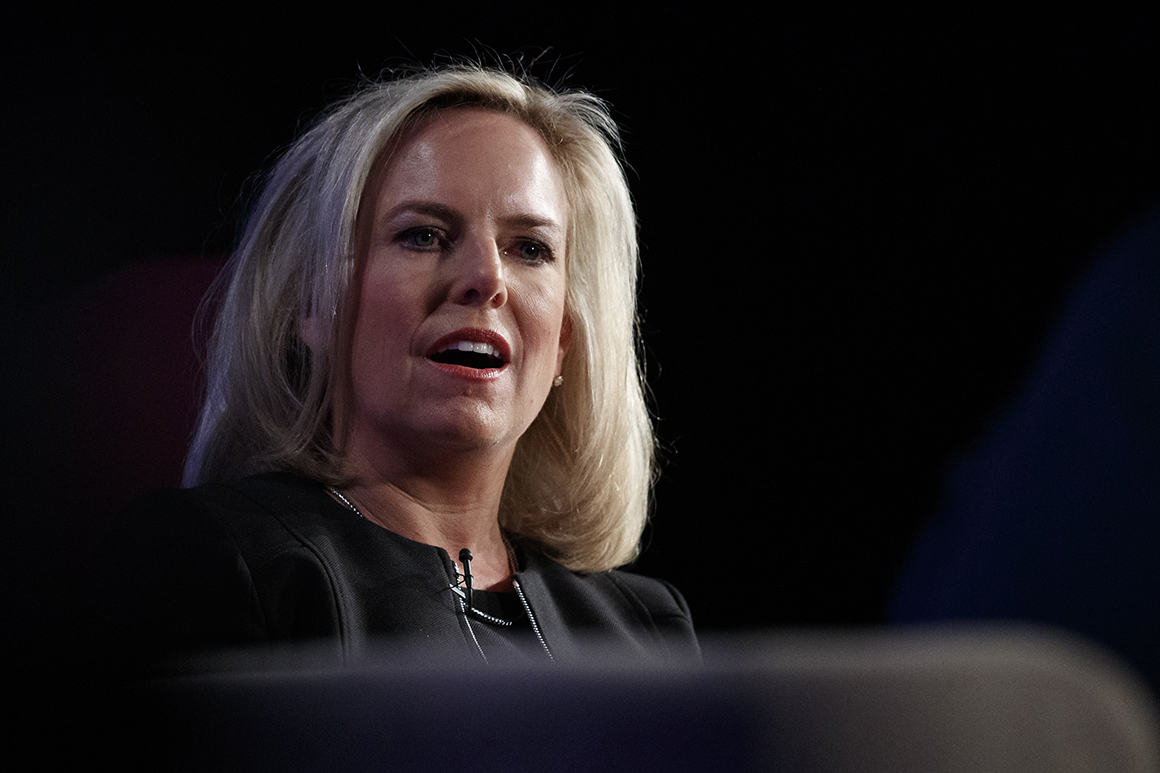 President Donald Trump and top officials have bellowed in recent weeks about a growing number of migrants arriving at the southwest border. DHS estimates that border arrests in March will approach 90,000 people, which would be the highest monthly level in more than a decade. Officials argue that a dramatic increase in migrant families and children has created a crisis that necessitates an immediate response from Congress.

“The secretary’s first and biggest priority is to demand congressional action,” a senior DHS official said on a call with reporters Tuesday morning. “The only way we fix this crisis, the only way we get lasting solutions, is if Congress closes the loopholes, fixes the misguided court decisions, and gives us relief from the extraordinary pull factors that our laws and those court decisions have created.”

Trump last week threatened to shut down the U.S.-Mexico border if Mexico didn’t stop the flow of migrants northward. The State Department also pulled back hundreds of millions in aid dollars to El Salvador, Guatemala and Honduras following Trump’s complaint that the countries hadn’t sufficiently stopped migrants from heading to the U.S.

The senior DHS official told reporters Tuesday that “all options are on the table” when it comes to closing down ports of entry along the border, but that “a definite decision has not been made.”

The official noted that ports along the border experienced delays Monday following Nielsen’s decision to detail up to 750 customs officers to assist with the care and custody of arriving migrants. The peak wait time for processing at a port of entry in Brownsville, Texas, stood at three hours — double the peak last year, the official said.

Ports in Texas, Arizona and California also saw delays, according to the official, who added that processing closed Monday at the Otay Mesa port of entry near San Diego with a backup of 150 trucks.

“This is a reality,” the official said. “We’re going to be transparent about that reality, but at the same time, we cannot shirk our responsibilities in our border security mission.”

Nielsen sent a letter to members of Congress last week that demanded a surge of “additional humanitarian and operational funds” — even though Congress passed a spending bill in February that devoted more than $49 billion in discretionary funding to the department, including $1.4 billion for border barriers.

In the letter, the secretary urged Congress to pass laws to allow families to be detained together through the duration of their immigration cases. Under a federal court order, children can be detained only 20 days, which DHS argues limits its ability to return families to their home countries.

Democrats and advocates contend the Trump administration hasn’t planned adequately for the rising number of families at the border, and could better manage its resources to process migrants more humanely and effectively. Whether Nielsen intended to meet with any Democratic lawmakers Tuesday remained unclear, and DHS did not immediately respond to a request for comment.

Nielsen on Monday also ordered border officials to step up the administration’s “Remain in Mexico” program, which has proceeded thus far in a limited fashion at and between certain ports of entry in California and Texas. Nielsen called for “hundreds” of additional migrants to be returned per day through the program, which forces certain non-Mexican asylum seekers to wait in Mexico until their cases are resolved in the U.S.

A court document filed Tuesday in a related lawsuit against “Remain in Mexico” said it’s been expanded to several areas not previously confirmed by DHS. The document said it was now active in Border Patrol’s El Paso sector, which includes the entirety of the border in New Mexico, and in the El Centro sector in Southern California.

The senior official who spoke with reporters Tuesday declined to provide the number of migrants returned to Mexico through the program to date. A Mexican official said in early March that roughly 150 people had been returned — a fraction of the tens of thousands of migrants arriving each month.