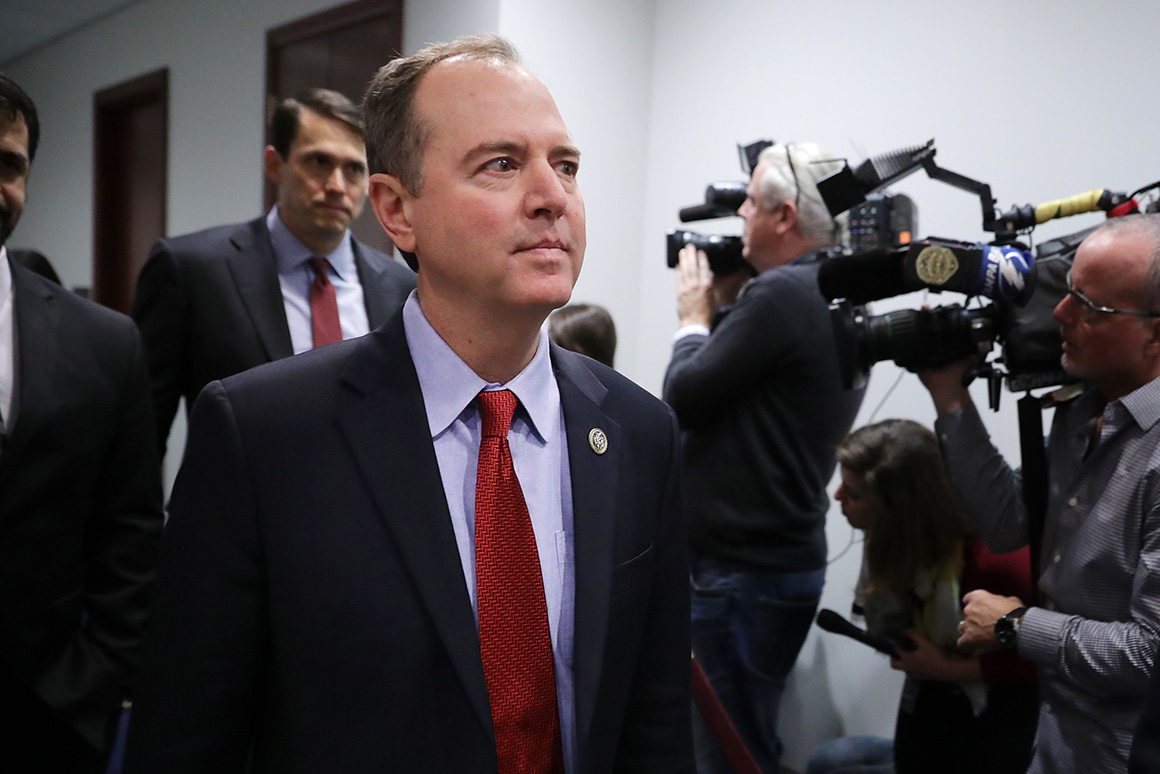 House Democrats say they’ll do anything it takes to force the public release of special counsel Robert Mueller’s report — except for the single-most hardball tactic deployed by Republicans only one year ago.

Republicans on the House Intelligence Committee last year mounted an unprecedented campaign to force the public release of classified intelligence. Democrats called the effort reckless and misleading, and the FBI said it presented "grave concerns" for national security. But Trump blessed the maneuver and ultimately declassified the material Republicans revealed in the so-called "Nunes Memo."

But the Democrats who now lead the House Intelligence Committee say they won’t pursue a similar strategy, even in service of making Mueller’s explosive findings public.

"That provision was so badly abused in the last Congress by the pushing out of false and misleading information that that’s not a road we want to go down," said House Intelligence Committee Chairman Adam Schiff (D-Calif.).

Democrats said the scars left by the fight over the Nunes Memo were still fresh and that the toxicity of the partisan battle had left the move — a last resort outlined in the House rules — unpalatable even as Democrats demand the public disclosure of Mueller’s findings.

Democrats’ wariness over mimicking the Republican tactic is a notable disarmament at a time when they have pledged to use their power to force the public release of Mueller’s complete findings.

Speaker Nancy Pelosi (D-Calif.) has said that Attorney General William Barr might try to bottle up Mueller’s most explosive findings by classifying them, and other Democrats have complained that Barr appears poised to deliver a heavily redacted report with multiple categories of information withheld from public view.

In the meantime, Democrats are pursuing more traditional methods to get access to Mueller’s report. On Wednesday, the House Judiciary Committee plans to authorize subpoenas against Barr to demand the release of the 400-page Mueller report and underlying evidence

Top House Democrats and aides have also said they’re ready to embrace other GOP tactics they once questioned in order to access Mueller’s findings. Senior Democratic aides have spent weeks emphasizing that Republicans gained unusual levels of access to Mueller-related files by squeezing and threatening legal action against the Trump Justice Department. Ultimately, the Justice Department capitulated to GOP demands — and now Democrats say they expect the same level of access to information that Republicans got.

The issue underscores the party’s eagerness to try to restore some of the norms shattered by Trump and the GOP, even as many on the left say such sentiment is pointless.

But producing their own version of the Nunes Memo would be a bridge too far, House Intelligence Committee Democrats say.

"Doing what they did would violated my conscience," said Rep. Mike Quigley (D-Ill.). "I can’t criticize them if I go and do the same thing."

Rep. Raja Krishnamoorthi (D-Ill.), a new member of the Intelligence Committee, similarly said he wouldn’t favor the tactic. "I’m not a big believer in doing things the Nunes way," he said.

Nunes’ office did not respond to a request for comment.

Schiff agreed, saying Democrats will use “whatever compulsion is necessary to make sure we get the full report and then if they’re trying to hide material by overclassification then we’ll have to discuss what remedies are available.” But he added “We don’t want to go anywhere near down the path that Republicans abused.”

Not all Intelligence Committee Democrats were quick to say Democrats should refuse to consider their own version of the Nunes Memo. One of the committee’s newest members, Rep. Val Demings (D-Fla.), said Democrats have to look at any and all precedents that Republicans set when deciding how to proceed.

"I think it’s just a shame that we have to look at other alternatives because the attorney general has chosen really not to cooperate," said Demings. "What I do believe is that when precedent has been established — whether it’s previous special counsel investigations or the Nunes Memo — precedent has already been established."

Asked if that meant she considered the Nunes Memo among the many options available to Democrats, Demings said, "Everything has to be."

Her concerns may take on new urgency. Trump has said previously that Mueller’s full report should be released publicly, yet he signaled this week that he may be having some reservations, tweeting Tuesday a video clip of attorney Alan Dershowitz saying the attorney general isn’t legally required to release the report.

Until Nunes spearheaded the tactic, lawmakers had never used the controversial House rule, which allows the Intelligence Committee to release any information — no matter how highly classified — if the committee determines "that the public interest would be served by such disclosure."

The Nunes Memo raised pointed questions about whether the FBI misled a secret court in order to authorize a wiretap on a former Trump campaign adviser in late 2016. It also revealed new details about the origin of the FBI’s Russia investigation, which Mueller later inherited. Democrats at the time panned the Nunes Memo as reckless and misleading and warned that its release could fray Congress’ relationship with intelligence agencies.

Under the process Republicans used to release the memo, the House Intelligence Committee "may disclose publicly any information in its possession" if a majority of members determine it is in the public interest. Any member of the committee may request such a determination and force a committee vote within five days.

If the committee supports releasing the information, it would then notify Trump, who has five days to either allow the information to become public or lodge an objection in writing.

If Trump denies the request, however, the process doesn’t end. Instead, the committee can vote to send the matter to the full House of Representatives, which would meet in a secret session to vote on the committee’s decision.

Though a secret session would be another unprecedented spectacle for Capitol Hill, a Democratic House would be almost certain to approve of such a disclosure request made by the Intelligence Committee, forcing the disclosure of Mueller’s sensitive information.

"I think we’re getting there but one step at a time," he said.