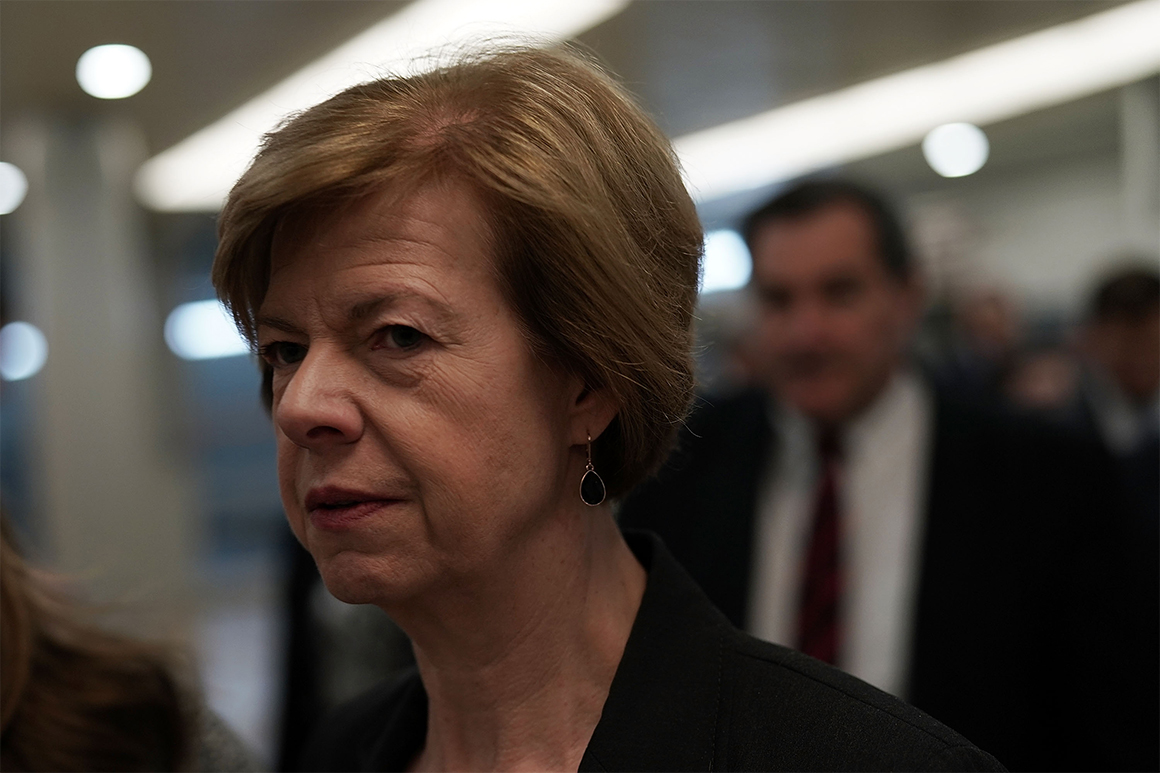 Senate Democrats are keeping their distance from Joe Biden as he undergoes new scrutiny over his interactions with women — with one potential presidential rival warning he will have to explain behavior that “demeaned” a woman if he enters the 2020 race.

Biden was hit with the second allegation of inappropriate physical contact with a woman on Monday, with Amy Lappos of Connecticut joining Lucy Flores of Nevada in describing untoward conduct by the longtime Delaware Democratic senator and two-term vice president.

“Lucy Flores felt demeaned and that’s never OK. And if Vice President Biden decides to run for president this is something he’s going to have to address directly with the American people,” Sen. Kirsten Gillibrand (D-N.Y.) said Monday evening outside the Senate chamber.

Neither Gillibrand nor any other Senate Democrats said that Biden should be disqualified from seeking the nomination. But a series of interviews Monday made clear that the caucus was still grappling with how to respond to the blowback facing a beloved member of the party.

Democrats have agonized over their handling of the case of former Sen. Al Franken, whom they ousted over alleged groping of women, and are clearly struggling with how to deal with seeing Biden in a new political light.

Many Senate Democrats had privately predicted for weeks that Biden could lock up more support within the Senate than anyone else, and some of his closest allies are standing by him.

But now there is discomfort with defending Biden among Democrats who are eager to create a sharp contrast to President Donald Trump, who bragged about sexually assaulting women on the “Access Hollywood” tape. While Senate Democrats aren’t calling for Biden’s head, they acknowledged that he’d displayed a lack of awareness about his behavior.

After a long pause, Sen. Tammy Baldwin (D-Wis.) said of Biden: “There’s a failure to understand how one’s actions impact others.”

“I was surprised by the allegation. It is clear that Lucy Flores felt it was inappropriate. It took courage for her to come forward and share her story, and I am glad she did,” said Sen. Jeanne Shaheen (D-N.H.). “All of us, including the Vice President, need to continue to work on changing our culture.”

"The focus isn’t on what his intentions were, it is how his behavior is experienced and one should not invade personal space. He needs to be a lot more aware of that,” said Sen. Mazie Hirono (D-Hawaii). "I would say with Trump it’s many, many degrees of worseness if there is such a word."

Biden is well-known for getting affectionate with supporters; he frequently hugged women when swearing in senators or interacting on the campaign trail. His supporters say it’s a core part of who he is and his downhome style of politics.

Biden’s defenders in the Senate, several of whom acted out Biden’s touchy-feely style for reporters Monday to brush away charges of impropriety, said that he will not be dissuaded from entering the race.

Biden is "a warm, tactile person. He reaches out and he touches and it’s like this and that. It’s hardly sexy,” said Sen. Dianne Feinstein (D-Calif.), gently touching an aide. “It’s a new thing that people have been affronted by it. Over 25 years I’ve never seen that before.”

“I’m confident he’s going to run and that Joe Biden is someone who hugs people and encourages people and is incredibly engaged with people is I think a pretty well-known feature of his personality,” said Sen. Chris Coons (D-Del.), who has been swept up in the new story because of video footage of Biden sidling up to his teenage daughter during his swearing in.

Coons said those who are dredging up that video are missing crucial context: “She doesn’t think there’s anything inappropriate or unkind or in an anyway unusual. And he was simply trying to encourage her in a moment that would be tough for any teenager, to have a bank of 50 TV and print cameras.”

Sen. Joe Manchin (D-W.Va.) lightly grabbed a reporter on the shoulder to demonstrate how Biden is and said simply: “If you’re looking for him to have his hand on shoulders there might be a lot of them. I just know Joe Biden, this is how he does it.”

But most Democrats took a different tack: They said they hadn’t observed the behavior themselves and that Flores and Lappos shouldn’t be dismissed.

“Everybody who makes an allegation should be listened to and heard and then it has to be examined in the context of how it happened. I appreciate what Lucy brought forward. I don’t have that experience with the vice president myself,” said Sen. Jacky Rosen (D-Nev.).

Russo said the descriptions of those images are "smears and forgeries" that have been exploited by "right wing trolls." He added that while Biden has said he will listen to the women who have spoken out against his behavior, "the important conversation about these issues are not advanced, nor are any criticisms of Vice President Biden validated, by …a failure to be vigilant about a cottage industry of lies."

Yet Lappos and Flores aren’t being accused of lying. Flores said that before an event, Biden smelled her hair and kissed her head; Lappos said he rubbed noses with her. In a statement released on Monday evening, Lappos said that Biden should “step aside” if he supports women and gender equality.

Biden’s potential rivals in the presidential race aren’t going there, yet.

Gillibrand, who called on Franken to resign in 2017, said simply that Biden will have to do a lot more explaining if he got in the race. Sanders and Sen. Elizabeth Warren (D-Mass.) had nothing new to say Monday after expressing their concerns with the Flores incident over the weekend.

“I personally have campaigned with him a lot in Minnesota and other places and I didn’t see anything like this, but I have no reason to believe they’re not telling the truth,” Sen. Amy Klobuchar (D-Minn.), who is also running for president, said in an interview.

Other Democrats were waiting to see how the Biden storyline would play out before commenting. For a party used to watching Republicans squirm over Trump’s offensive behavior, Democrats were clearly at pains as they sought to address Biden’s controversy.

“We all know Joe and how he is and the caring guy that he is, but he needs to be sensitive to his actions and it’s important that he be hearing from the women,” said Sen. Debbie Stabenow (D-Mich.). “It’s an important issue in the context of running against this president and all that he has done to women.”